The Reign of Mary Tudor 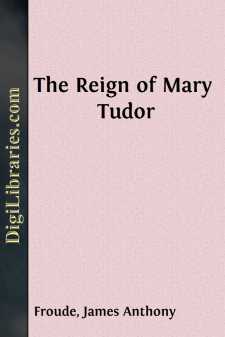 Add to My Favorites
Published: 8 years ago
Downloads: 62
Rating: (0 Votes)

The memory of no English sovereign has been so execrated as that of Mary Tudor. For generations after her death her name, with its horrid epithet clinging round it like the shirt of Nessus, was a bugbear in thousands of Protestant homes. It is true that nearly 300 persons were burnt at the stake in her short reign. But she herself was more inclined to mercy than almost any of her predecessors on the throne. Stubbs speaks of her father's "holocausts" of victims. The persecution of Papists under Edward was not less rigorous than that of Protestants under Mary. When her record is compared with that of Philip of Spain, with his Council of Blood in the Netherlands, or of Charles IX. in France, she appears as an apostle of toleration. Why, then, has her memory been covered through centuries with scorn and obloquy?

Froude will have it that it was due to a national detestation of the crimes which were committed in the name of religion. Those who take a more detached view of history can find little evidence to support the assumption. The nation as a whole seemed to acquiesce in the persecution. The government was weak, there was no standing army, and Mary, like all the Tudors, rested her authority on popular sanction. Plots against her were few, and they were all easily suppressed. Parliament met regularly. It was not the submissive parliament of Henry VIII. It thwarted some of Mary's dearest projects. For some time it offered opposition to, if it did not actively resist, the Spanish marriage. It was inexorably opposed to the restitution of church property. It refused to alter the succession to the Crown as Mary wished. But it never remonstrated against the persecution of Protestants. It cheerfully revived the old acts for the burning of Lollard heretics. Froude suggests that Englishmen were aghast at the use to which they were afterwards put. But though parliament after parliament was summoned after the Smithfield fires had been lit, there was no sign of disapproval or of condemnation. When Edward died, there was an instantaneous return to Catholicism. When Mary died, Elizabeth had to walk warily in bringing about innovations in religion. Mary was crowned with the ceremonies of the Catholic Church. When Elizabeth was crowned, nearly all the bishops, including the "bloody" Bonner, attended, and the service of the mass was used. Harpsfield, the notorious Archdeacon of Canterbury, the last man to condemn heretics to the stake in England, publicly stated, weeks after the accession of Elizabeth, that there should be no change in religion. Later generations, judging events and characters by their own standard, have pitilessly condemned the Marian persecutions. The Englishmen of those days were not so squeamish or so indifferent.

There can be no doubt that Mary was unpopular among her own contemporaries. Two reasons probably account for it. The first was her marriage with Philip of Spain. There is no nation in Europe which has shown itself more tolerant of alien sovereigns than the English. They submitted to William of Normandy almost without a struggle after Senlac. They adopted the Plantagenet as their national line of kings. The Tudors were Welsh; the Stuarts Scotch; William III. was a Dutchman; the Hanoverian dynasty was German. But though tolerant of foreign dynasties, the English have, since the days of John, been excessively jealous of foreign influences. One of the main causes of Henry III.'s unpopularity was the overweening influence of his foreign favourites. From Edward I. downwards the Plantagenets ruled as English sovereigns. Henry VII., though he was crowned on the field of battle and claimed the throne by right of conquest, was too discreet to maintain his power, as Mary was once tempted to do, by the aid of Welsh guards. The fiercest hostility was evoked by James I., William III., and the first two Georges, because they surrounded themselves with favourites from their own countries. Foreigners might sit on the throne of England, but they had to rule as English sovereigns and rest their power on the support of the English people. This intense national jealousy was unhappily aroused by Mary. The strict limitations which were placed on her husband's powers should have warned her of her danger. Philip was allowed the empty title of king, but from the realities of power he was studiously excluded. Philip was careful to maintain the spirit as well as the letter of his obligations. He made no attempt to encroach upon the sovereignty of Mary. He advised her, as it was his duty to do, but he did not interfere with the government of the country. No Spanish troops were landed in England, even when war had broken out with France, and the coasts of England were unguarded. Yet the morbid suspicions of the people were not allayed. The Dudley plot and the Stafford invasion were justified by their authors, not on the ground of Mary's bloody persecutions, but because it was feared that Philip was planning a coup d'état. Mary's popularity began to wane with her marriage; it sunk lower and lower till it almost disappeared when England was dragged into a war with France in the interests of Spain....