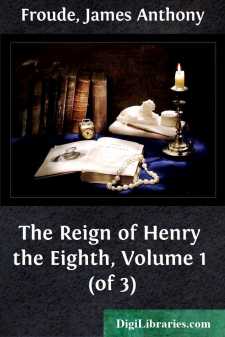 James Anthony Froude was born at Dartington Rectory, the youngest son of the Archdeacon of Totnes, on April 23, 1818. His father was a clergyman of the old school, as much squire as parson. In the concluding chapter to his History of England, Froude wrote that "for a hundred and forty years after the Revolution of 1688, the Church of England was able to fulfil with moderate success the wholesome functions of a religious establishment. Theological doctrinalism passed out of fashion; and the clergy, merged as they were in the body of the nation, and no longer endeavouring to elevate themselves into a separate order, were occupied healthily in impressing on their congregations the meaning of duty and moral responsibility to God." Of this sane and orthodox, but not over-spiritual, clergy, Archdeacon Froude was an excellent and altogether wholesome type. He was a stiff Tory; his hatred of Dissent was so uncompromising that he would not have a copy of the Pilgrim's Progress in the rectory. A stern, self-contained, reticent man, he never, in word of deed, confessed his affection for his youngest son. He was a good horseman, and was passionately fond of open-air exercises and especially of hunting. His one accomplishment was drawing, and his sketches in after years earned the praise of Ruskin.

Cast in the same mould, but fashioned by different circumstances, the archdeacon's eldest son, Richard Hurrell Froude, was a man of greater intellectual brilliance and even more masterful character. He was one of the pioneers of the Oxford Movement, and it was only his early death that deposed him from his place of equality with Newman and Keble and Pusey. Anthony was a sickly child, and from his earliest years lacked the loving care of a mother. He was brought up with Spartan severity by his father and his aunt. The most venial self-indulgence was regarded as criminal. From the age of three he was inured to hardship by being ducked every morning in a trough of ice-cold water. Hurrell Froude felt no tenderness for the ailing lad. Once, in order to rouse a manly spirit in his little brother, he took him by the heels, plunged him like another Achilles into a stream, and stirred with his head the mud at the bottom. Froude has been accused, and not without justice, of not feeling a proper aversion to acts of cruelty. The horrible Boiling Act of Henry VIII. excites neither disgust nor hatred in him; and he makes smooth excuses for the illegal tortures of the rack and the screw which were inflicted on prisoners by Elizabeth and her ministers. He had himself been reared in a hardy school; he had been trained to be indifferent to pain. It may well be that his callousness in speaking of Tudor cruelties is to be traced to the influences that surrounded his loveless childhood and youth.

Hurrell Froude was the idol of his younger brothers. He was a man of brilliant parts, and a born leader of men. His hatred of Radicals and Dissenters transcended even his father's dislike of them....