The Reign of Andrew Jackson 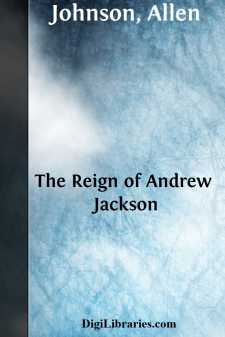 CHAPTER I JACKSON THE FRONTIERSMAN

Among the thousands of stout-hearted British subjects who decided to try their fortune in the Western World after the signing of the Peace of Paris in 1763 was one Andrew Jackson, a Scotch-Irish Presbyterian of the tenant class, sprung from a family long resident in or near the quaint town of Carrickfergus, on the northern coast of Ireland, close by the newer and more progressive city of Belfast.

With Jackson went his wife and two infant sons, a brother-in-law, and two neighbors with their families, who thus made up a typical eighteenth-century emigrant group. Arrived at Charleston, the travelers fitted themselves out for an overland journey, awaited a stretch of favorable weather, and set off for the Waxhaw settlement, one hundred and eighty miles to the northwest, where numbers of their kinsmen and countrymen were already established. There the Jacksons were received with open arms by the family of a second brother-in-law, who had migrated a few years earlier and who now had a comfortable log house and a good-sized clearing.

The settlement lay on the banks of the upper Catawba, near the junction of that stream with Waxhaw Creek; and as it occupied a fertile oasis in a vast waste of pine woods, it was for decades largely cut off from touch with the outside world. The settlement was situated, too, partly in North Carolina and partly in South Carolina, so that in the pre-Revolutionary days many of the inhabitants hardly knew, or cared to know, in which of the two provinces they dwelt.

Upon their arrival Jackson's friends bought land on the creek and within the bounds of the settlement. Jackson himself was too poor, however, to do this, and accordingly took up a claim six miles distant on another little stream known as Twelve-mile Creek. Here, in the fall of 1765, he built a small cabin, and during the winter he cleared five or six acres of ground. The next year he was able to raise enough corn, vegetables, and pork to keep his little household from want. The tract thus occupied cannot be positively identified, but it lay in what is now Union County, North Carolina, a few miles from Monroe, the county seat.

Then came tragedy of a sort in which frontier history abounds. In the midst of his efforts to hew out a home and a future for those who were dear to him the father sickened and died, in March, 1767, at the early age of twenty-nine, less than two years after his arrival at the settlement. Tradition says that his death was the result of a rupture suffered in attempting to move a heavy log, and that it was so sudden that the distracted wife had no opportunity to seek aid from the distant neighbors. When at last the news got abroad, sympathy and assistance were lavished in true frontier fashion. Borne in a rude farm wagon, the remains were taken to the Waxhaw burying ground and were interred in a spot which tradition, but tradition only, is able today to point out.

The widow never returned to the desolated homestead. She and her little ones were taken into the family of one of her married sisters, where she spent her few remaining years....