The Red Triangle Being Some Further Chronicles of Martin Hewitt, Investigator 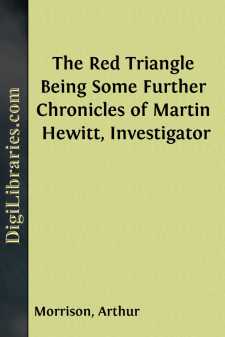 I have already recorded many of the adventures of my friend Martin Hewitt, but among them there have been more of a certain few which were discovered to be related together in a very extraordinary manner; and it is to these that I am now at liberty to address myself. There may have been others—cases which gave no indication of their connection with these; some of them indeed I may have told without a suspicion of their connection with the Red Triangle; but the first in which that singular accompaniment became apparent was the matter of Samuel's diamonds. The case exhibited many interesting features, and I was very anxious to report it, with perhaps even less delay than I had thought judicious in other cases; but Hewitt restrained me.

"No, Brett," he said, "there is more to come of this. This particular case is over, it is true, but there is much behind. I've an idea that I shall see that Red Triangle again. I may, or, of course, I may not; but there is deep work going on—very deep work, and whether we see more of it or not, I must keep prepared. I can't afford to throw a single card upon the table. So, as many notes as you please, Brett, for future reference; but no publication yet—none of your journalism!"

Hewitt was right. It was not so long before we heard more of the Red Triangle, and after that more, though the true connection of some of the cases with the mysterious symbol and the meaning of the symbol itself remained for a time undiscovered. But at last Hewitt was able to unmask the hideous secret, and for ever put an end to the evil influence that gathered about the sign; and now there remains no reason why the full story should not be told.

I have told elsewhere of my first acquaintance with Martin Hewitt, of his pleasant and companionable nature, his ordinary height, his stoutness, his round, smiling face—those characteristics that aided him so well in his business of investigator, so unlike was his appearance and manner to that of the private detective of the ordinary person's imagination. Therefore I need only remind my readers that my bachelor chambers were, during most of my acquaintance with Hewitt, in the old building near the Strand, in which Hewitt's office stood at the top of the first flight of stairs; where the plain ground-glass of the door bore as inscription the single word "Hewitt," and the sharp lad, Kerrett, first received visitors in the outer office.

Next door to this old house, at the time I am to speak of, a much newer building stood, especially built for letting out in offices. It happened that one day as Hewitt left his office for a late lunch, he became aware of a pallid and agitated Jew who was pervading the front door of this adjoining building. The man exhibited every sign of nervous expectancy, staring this way and that up and down the busy street, and once or twice rushing aimlessly half-way up the inner stairs, and as often returning to the door. Apprehension was plain on his pale face, and he was clearly in a state that blinded his attention to the ordinary matters about him, just as happens when a man is in momentary and nervous expectation of some serious event.

Noting these things as he passed, with no more than the observation that was his professional habit, Hewitt proceeded to his lunch. This done with, he returned to his office, perceiving, as he passed the next-door building, that the distracted Jew was no longer visible. It seemed plain that the person or the event he had awaited with such obvious nervousness had arrived and passed; one more of the problems, anxieties or crises that join and unravel moment by moment in the human ant-hill of London, had perhaps closed for good or ill within the past half-hour; perhaps it had only begun....