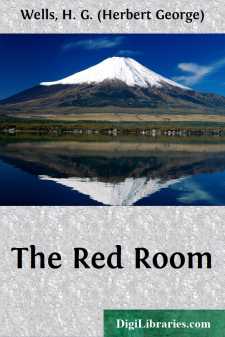 "It's your own choosing," said the man with the withered arm once more.

I heard the faint sound of a stick and a shambling step on the flags in the passage outside. The door creaked on its hinges as a second old man entered, more bent, more wrinkled, more aged even than the first. He supported himself by the help of a crutch, his eyes were covered by a shade, and his lower lip, half averted, hung pale and pink from his decaying yellow teeth. He made straight for an armchair on the opposite side of the table, sat down clumsily, and began to cough. The man with the withered hand gave the newcomer a short glance of positive dislike; the old woman took no notice of his arrival, but remained with her eyes fixed steadily on the fire.

"I said—it's your own choosing," said the man with the withered hand, when the coughing had ceased for a while.

"It's my own choosing," I answered.

The man with the shade became aware of my presence for the first time, and threw his head back for a moment, and sidewise, to see me. I caught a momentary glimpse of his eyes, small and bright and inflamed. Then he began to cough and splutter again.

"Why don't you drink?" said the man with the withered arm, pushing the beer toward him. The man with the shade poured out a glassful with a shaking hand, that splashed half as much again on the deal table. A monstrous shadow of him crouched upon the wall, and mocked his action as he poured and drank. I must confess I had scarcely expected these grotesque custodians. There is, to my mind, something inhuman in senility, something crouching and atavistic; the human qualities seem to drop from old people insensibly day by day. The three of them made me feel uncomfortable with their gaunt silences, their bent carriage, their evident unfriendliness to me and to one another. And that night, perhaps, I was in the mood for uncomfortable impressions. I resolved to get away from their vague fore-shadowings of the evil things upstairs.

"If," said I, "you will show me to this haunted room of yours, I will make myself comfortable there."

The old man with the cough jerked his head back so suddenly that it startled me, and shot another glance of his red eyes at me from out of the darkness under the shade, but no one answered me. I waited a minute, glancing from one to the other. The old woman stared like a dead body, glaring into the fire with lack-lustre eyes.

"If," I said, a little louder, "if you will show me to this haunted room of yours, I will relieve v you from the task of entertaining me."

"There's a candle on the slab outside the door," said the man with the withered hand, looking at my feet as he addressed me. "But if you go to the Red Room to-night—"

"This night of all nights!" said the old woman, softly.

"You go along the passage for a bit," said he, nodding his head on his shoulder at the door, "until you come to a spiral staircase; and on the second landing is a door covered with green baize. Go through that, and down the long corridor to the end, and the Red Room is on your left up the steps."

"Have I got that right?" I said, and repeated his directions....