The Red River Colony A Chronicle of the Beginnings of Manitoba 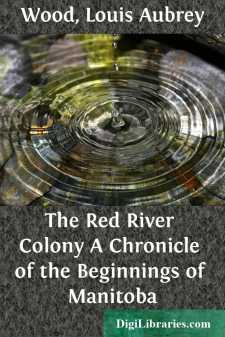 When the Ranger stole into the firth of Solway she carried an exultant crew. From the cliffs of Cumberland she might have been mistaken for a trading bark, lined and crusted by long travel. But she was something else, as the townsfolk of Whitehaven, on the north-west coast of England, had found it to their cost. Out of their harbour the Ranger had just emerged, leaving thirty guns spiked and a large ship burned to the water's edge. In fact, this innocent-looking vessel was a sloop-of-war—as trim and tidy a craft as had ever set sail from the shores of New England. On her upper deck was stationed a strong battery of eighteen six-pounders, ready to be brought into action at a moment's notice.

On the quarter-deck of the Ranger, deep in thought, paced the captain, John Paul Jones, a man of meagre build but of indomitable will, and as daring a fighter as roved the ocean in this year 1778. He held a letter of marque from the Congress of the revolted colonies in America, and was just now engaged in harrying the British coasts. Across the broad firth the Ranger sped with bellying sails and shaped her course along the south-western shore of Scotland. To Paul Jones this coast was an open book; he had been born and bred in the stewartry of Kirkcudbright, which lay on his vessel's starboard bow. Soon the Ranger swept round a foreland and boldly entered the river Dee, where the anchor was dropped.

A boat was swung out, speedily manned, and headed for the shelving beach of St Mary's Isle. Here, as Captain Paul Jones knew, dwelt one of the chief noblemen of the south of Scotland. The vine-clad, rambling mansion of the fourth Earl of Selkirk was just behind the fringe of trees skirting the shore. According to the official report of this descent upon St Mary's Isle, it was the captain's intention to capture Selkirk, drag him on board the Ranger, and carry him as a hostage to some harbour in France. But it is possible that there was another and more personal object. Paul Jones, it is said, believed that he was a natural son of the Scottish nobleman, and went with this armed force to disclose his identity.

When the boat grated upon the shingle the seamen swarmed ashore and found themselves in a great park, interspersed with gardens and walks and green open spaces. The party met with no opposition. Everything, indeed, seemed to favour their undertaking, until it was learned from some workmen in the grounds that the master was not at home.

In sullen displeasure John Paul Jones paced nervously to and fro in the garden. His purpose was thwarted; he was cheated of his prisoner. A company of his men, however, went on and entered the manor-house. There they showed the hostile character of their mission. Having terrorized the servants, they seized the household plate and bore it in bags to their vessel. Under full canvas the Ranger then directed her course for the Irish Sea.

Thomas Douglas, the future lord of the Red River Colony, was a boy of not quite seven years at the time of this raid on his father's mansion....