by Ida B. Wells-Barnett 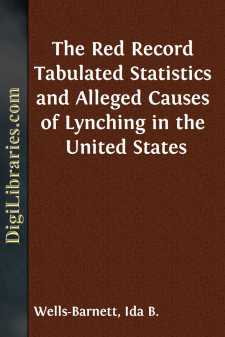 The student of American sociology will find the year 1894 marked by a pronounced awakening of the public conscience to a system of anarchy and outlawry which had grown during a series of ten years to be so common, that scenes of unusual brutality failed to have any visible effect upon the humane sentiments of the people of our land.

Beginning with the emancipation of the Negro, the inevitable result of unbribled power exercised for two and a half centuries, by the white man over the Negro, began to show itself in acts of conscienceless outlawry. During the slave regime, the Southern white man owned the Negro body and soul. It was to his interest to dwarf the soul and preserve the body. Vested with unlimited power over his slave, to subject him to any and all kinds of physical punishment, the white man was still restrained from such punishment as tended to injure the slave by abating his physical powers and thereby reducing his financial worth. While slaves were scourged mercilessly, and in countless cases inhumanly treated in other respects, still the white owner rarely permitted his anger to go so far as to take a life, which would entail upon him a loss of several hundred dollars. The slave was rarely killed, he was too valuable; it was easier and quite as effective, for discipline or revenge, to sell him "Down South."

But Emancipation came and the vested interests of the white man in the Negro's body were lost. The white man had no right to scourge the emancipated Negro, still less has he a right to kill him. But the Southern white people had been educated so long in that school of practice, in which might makes right, that they disdained to draw strict lines of action in dealing with the Negro. In slave times the Negro was kept subservient and submissive by the frequency and severity of the scourging, but, with freedom, a new system of intimidation came into vogue; the Negro was not only whipped and scourged; he was killed.

Not all nor nearly all of the murders done by white men, during the past thirty years in the South, have come to light, but the statistics as gathered and preserved by white men, and which have not been questioned, show that during these years more than ten thousand Negroes have been killed in cold blood, without the formality of judicial trial and legal execution. And yet, as evidence of the absolute impunity with which the white man dares to kill a Negro, the same record shows that during all these years, and for all these murders only three white men have been tried, convicted, and executed. As no white man has been lynched for the murder of colored people, these three executions are the only instances of the death penalty being visited upon white men for murdering Negroes.

Naturally enough the commission of these crimes began to tell upon the public conscience, and the Southern white man, as a tribute to the nineteenth-century civilization, was in a manner compelled to give excuses for his barbarism. His excuses have adapted themselves to the emergency, and are aptly outlined by that greatest of all Negroes, Frederick Douglass, in an article of recent date, in which he shows that there have been three distinct eras of Southern barbarism, to account for which three distinct excuses have been made....