The Red Man's Continent: a chronicle of aboriginal America 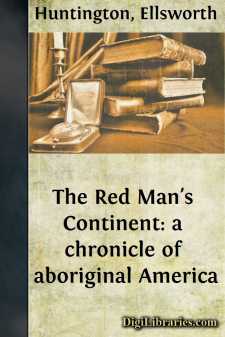 CHAPTER I. THE APPROACHES TO AMERICA

Across the twilight lawn at Hampton Institute straggles a group of sturdy young men with copper-hued complexions. Their day has been devoted to farming, carpentry, blacksmithing, or some other trade. Their evening will be given to study. Those silent dignified Indians with straight black hair and broad, strong features are training their hands and minds in the hope that some day they may stand beside the white man as equals. Behind them, laughing gayly and chattering as if without a care in the world, comes a larger group of kinky-haired, thick-lipped youths with black skins and African features. They, too, have been working with the hands to train the mind. Those two diverse races, red and black, sit down together in a classroom, and to them comes another race. The faces that were expressionless or merely mirthful a minute ago light up with serious interest as the teacher comes into the room. She stands there a slender, golden-haired, blue-eyed Anglo-Saxon girl just out of college—a mere child compared with the score of swarthy, stalwart men as old as herself who sit before her. Her mobile features seem to mirror a hundred thoughts while their impassive faces are moved by only one. Her quick speech almost trips in its eagerness not to waste the short, precious hour. Only a strong effort holds her back while she waits for the slow answers of the young men whom she drills over and over again in simple problems of arithmetic. The class and the teacher are an epitome of American history. They are more than that. They are an epitome of all history.

History in its broadest aspect is a record of man's migrations from one environment to another. America is the last great goal of these migrations. He who would understand its history must know its mountains and plains, its climate, its products, and its relation to the sea and to other parts of the world. He must know more than this, however, for he must appreciate how various environments alter man's energy and capacity and give his character a slant in one direction or another. He must also know the paths by which the inhabitants have reached their present homes, for the influence of former environments upon them may be more important than their immediate surroundings. In fact, the history of North America has been perhaps more profoundly influenced by man's inheritance from his past homes than by the physical features of his present home. It is indeed of vast importance that trade can move freely through such natural channels as New York Harbor, the Mohawk Valley, and the Great Lakes. It is equally important that the eastern highlands of the United States are full of the world's finest coal, while the central plains raise some of the world's most lavish crops. Yet it is probably even more important that because of his inheritance from a remote ancestral environment man is energetic, inventive, and long-lived in certain parts of the American continent, while elsewhere he has not the strength and mental vigor to maintain even the degree of civilization to which he seems to have risen....