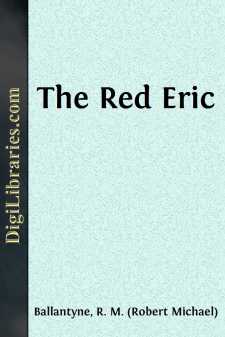 The Tale Begins with the Engaging of a “Tail”—and the Captain Delivers his Opinions on Various Subjects.

Captain Dunning stood with his back to the fireplace in the back-parlour of a temperance coffee-house in a certain town on the eastern seaboard of America.

The name of that town is unimportant, and, for reasons with which the reader has nothing to do, we do not mean to disclose it.

Captain Dunning, besides being the owner and commander of a South Sea whale-ship, was the owner of a large burly body, a pair of broad shoulders, a pair of immense red whiskers that met under his chin, a short, red little nose, a large firm mouth, and a pair of light-blue eyes, which, according to their owner’s mood, could flash like those of a tiger or twinkle sweetly like the eyes of a laughing child. But his eyes seldom flashed; they more frequently twinkled, for the captain was the very soul of kindliness and good-humour. Yet he was abrupt and sharp in his manner, so that superficial observers sometimes said he was hasty.

Captain Dunning was, so to speak, a sample of three primary colours—red, blue, and yellow—a walking fragment, as it were, of the rainbow. His hair and face, especially the nose, were red; his eyes, coat, and pantaloons were blue, and his waistcoat was yellow.

At the time we introduce him to the reader he was standing, as we have said, with his back to the fireplace, although there was no fire, the weather being mild, and with his hands in his breeches pockets. Having worked with the said hands for many long years before the mast, until he had at last worked himself behind the mast, in other words, on to the quarterdeck and into possession of his own ship, the worthy captain conceived that he had earned the right to give his hands a long rest; accordingly he stowed them away in his pockets and kept them there at all times, save when necessity compelled him to draw them forth.

“Very odd,” remarked Captain Dunning, looking at his black straw hat which lay on the table before him, as if the remark were addressed to it—“very odd if, having swallowed the cow, I should now be compelled to worry at the tail.”

As the black straw hat made no reply, the captain looked up at the ceiling, but not meeting with any response from that quarter, he looked out at the window and encountered the gaze of a seaman flattening his nose on a pane of glass, and looking in.

The captain smiled. “Ah! here’s a tail at last,” he said, as the seaman disappeared, and in another moment reappeared at the door with his hat in his hand.

It may be necessary, perhaps, to explain that Captain Dunning had just succeeded in engaging a first-rate crew for his next whaling voyage (which was the “cow” he professed to have swallowed), with the exception of a cook (which was the “tail,” at which he feared he might be compelled to worry).

“You’re a cook, are you?” he asked, as the man entered and nodded.

“And an uncommonly ill-favoured rascally-looking cook you are,” thought the captain; but he did not say so, for he was not utterly regardless of men’s feelings....