The Red-Blooded Heroes of the Frontier 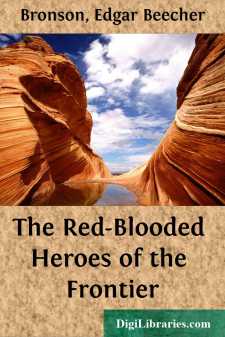 From San Antonio to Fort Griffin, Joe Loving's was a name to conjure with in the middle sixties. His tragic story is still told and retold around camp-fires on the Plains.

One of the thriftiest of the pioneer cow-hunters, he was the first to realize that if he would profit by the fruits of his labor he must push out to the north in search of a market for his cattle. The Indian agencies and mining camps of northern New Mexico and Colorado, and the Mormon settlements of Utah, were the first markets to attract attention. The problem of reaching them seemed almost hopeless of solution. Immediately to the north of them the country was trackless and practically unknown. The only thing certain about it was that it swarmed with hostile Indians. What were the conditions as to water and grass, two prime essentials to moving herds, no one knew. To be sure, the old overland mail road to El Paso, Chihuahua, and Los Angeles led out west from the head of the Concho to the Pecos; and once on the Pecos, which they knew had its source indefinitely in the north, a practicable route to market should be possible.

But the trouble was to reach the Pecos across the ninety intervening miles of waterless plateau called the Llano Estacado, or Staked Plain. This plain was christened by the early Spanish explorers who, looking out across its vast stretches, could note no landmark, and left behind them driven stakes to guide their return. An elevated tableland averaging about one hundred miles wide and extending four hundred miles north and south, it presents, approaching anywhere from the east or the west, an endless line of sharply escarped bluffs from one hundred to two hundred feet high that with their buttresses and re-entrant angles look at a distance like the walls of an enormous fortified town. And indeed it possesses riches well worth fortifying.

While without a single surface spring or stream from Devil's River in the south to Yellow House Cañon in the north, this great mesa is nevertheless the source of the entire stream system of central and south Texas. Absorbing thirstily every drop of moisture that falls upon its surface, from its deep bosom pours a vitalizing flood that makes fertile and has enriched an empire,—a flood without which Texas, now producing one-third of the cotton grown in the United States, would be an arid waste. Bountiful to the south and east, it is niggardly elsewhere, and only two small springs, Grierson and Mescalero, escape from its western escarpment.

A driven herd normally travels only twelve to seventeen miles a day, and even less than this in the early Spring when herds usually are started. It therefore seemed a desperate undertaking to enter upon the ninety-mile "dry drive," from the head of the Concho to the Horsehead Crossing of the Pecos, wherein two-thirds of one's cattle were likely to perish for want of water.

Joe Loving was the first man to venture it, and he succeeded. He traversed the Plain, fought his way up the Pecos, reached a good market, and returned home in the Autumn, bringing a load of gold and stories of hungry markets in the north that meant fortunes for Texas ranchmen....