The Rebellion of Margaret 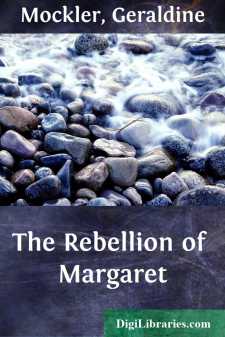 It was a sultry afternoon in early July. The sun was shining out of a cloudless blue sky, the air was so still and so overpoweringly hot that it seemed to have sent every living creature, save the owner of the voice that was calling upon Margaret Anstruther, to sleep, for no answer was returned to the thrice repeated call, and the silence which the summons had broken settled once more over the garden. Not a leaf on even one of the topmost twigs of the huge old elms from underneath which that insistent voice had come was stirring, not an insect chirped, and the birds who held morning and evening concerts among the branches were silent now.

"Margaret Anstruther, will you come and play tennis? My brothers Reginald and Lionel want a game, and if you will play we shall be four, and because you have not had much practice lately you shall play with Reginald, for he plays better than Lionel."

Greystones was noted for its elm-trees. The grounds, indeed, contained little else in the shape of flowers or trees but elms. For a few brief weeks in spring when they were dressed in the tenderest of greens they were lovely, and in the autumn, if the leaves were not stripped off by gales before they had a chance to turn golden, their hues could vie with those flaunted by any other trees, but in the summer their dull, uniform green was apt to become monotonous, and Margaret Anstruther was then wont to declare that she could cheerfully have rooted up every one of them.

But as the remark never reached any one else's ears but her own, no one's feelings were hurt. A chance visitor to Greystones, regular visitors were not encouraged, had once observed that the entire grounds, some thirty or forty acres in extent, which comprised the domain must have been an elm wood originally, and that a space just sufficient on which to erect a house of moderate dimensions had been cleared in the heart of it, Greystones had been built, a way cut through the trees to form a drive to the road a quarter of a mile distant from the house, and the rest of the wood left undisturbed to be called a garden or not as the owner pleased.

Certainly the present owner had made no attempt to form a garden, but had allowed the elms to grow right up to the walls of the house and to darken the windows of the gloomily situated dwelling as much as they pleased.

"Margaret Anstruther, if you will not come and play tennis, will you come for a ride upon your bicycle—that nice new one that you received as a present from—from your grandfather." Here the speaker paused and laughed as if the idea of Margaret Anstruther getting a bicycle from her grandfather was a distinctly amusing idea. "We will go far, far along to the blue distance—much farther than you ever went with Miss Bidwell—and we will have tea at the inn down by the river and come home by moonlight. We shall be quite safe, for Reginald and Lionel will be with us, and they will take care of us."

The part of the grounds in which this so far one-sided conversation was taking place was at some considerable distance from the house, in fact it was right on the confines of the wood and as far from the house as possible....