The Rebel of the School 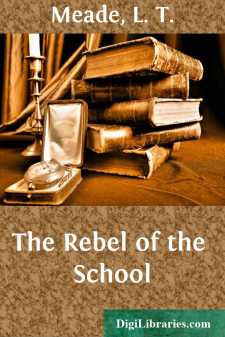 CHAPTER I. SENT TO COVENTRY!

The school was situated in the suburbs of the popular town of Merrifield, and was known as the Great Shirley School. It had been endowed some hundred years ago by a rich and eccentric individual who bore the name of Charles Shirley, but was now managed by a Board of Governors. By the express order of the founder, the governors were women; and very admirably did they fulfil their trust. There was no recent improvement in education, no better methods, no sanitary requirements which were not introduced into the Great Shirley School. The number of pupils was limited to four hundred, one hundred of which were foundationers and were not required to pay any fees; the remaining three hundred paid small fees in order to be allowed to secure an admirable and up-to-date education under the auspices of the great school.

There came a day in early autumn, shortly after the girls had reassembled after their summer vacation, when they streamed out of the building in groups of twenties and thirties and forties. They stood about and talked as girls will.

The Great Shirley School, well as it was managed, had perhaps a larger share than many schools of those temptations which make school a world—a world for the training either for good or evil of those who go to it. There were the girls who attended the school in the ordinary way, and there were the girls who were drafted on to the foundation from lower schools. These latter were looked down upon by the least noble and the meanest of their fellow-scholars.

There was a slight rain falling, and two or three girls standing in a group raised their umbrellas, but they still stood beside the gates.

"She's quite the very prettiest girl I ever saw," cried Alice Tennant; "but of course we can have nothing to do with her. She entered a week ago. She doesn't pay any of the fees; she has no pretence to being a lady. Oh, here she comes! Did you ever see such a face?"

A slight, shabbily dressed little girl, with her satchel of books slung on her arm, now appeared. She looked to right and left of her as though she were slightly alarmed. Her face was beautiful in the truest sense of the world; it did not at all match with the shabby, faded clothes which she wore. She had large deep-violet eyes, jet-black hair, and a sweet, fresh complexion. Her expression was bewitching, and when she smiled a dimple came in her cheek.

"Look—look!" cried Mary Denny. "Isn't she all that I have said?"

"Yes, and more. What a pity we can't know her!" said Alice Tennant.

"But can't we? I really don't see why we should make the poor child miserable," said Mary Denny.

"It is not to be thought of. We must worship the beautiful new star from afar. Perhaps she will do something to raise herself into our set; but as it is, she must go with Kate Rourke and Hannah Johnson and Clara Sawyer, and all the rest of the foundationers."

"Well, we have seen her now," said Mary, "so I suppose we needn't stand talking about her any longer. Will you come home and have tea with me, Alice? Mother said I might ask you."

"I wish I could come," said Alice; "but we are expecting Kathleen."

"Oh, the Irish girl! Is it really arranged that she is to come?"

"Yes, of course it is. She comes to-night. I have never seen her. We are all pleased, and expect that she will be a very great acquisition."

"Irish girls always are," said Mary. "They're so gay and full of life, and are so ridiculously witty. Don't you remember that time when we had Norah Mahoney at the school? What fun that was!"

"But she got into terrible scrapes, and was practically dismissed," said Alice. "I only hope Kathleen won't be in that style."

"But do you know anything about her? The Irish are always so terribly poor."

"She is not poor at all. She has got an uncle and aunt in Chicago, and they are as rich as can be; and her uncle is coming to see her at Christmas. And besides that, her father has an awfully old castle in the south-west of Ireland. He is never troubled on account of the Land League or anything else, and Kathleen will have lots and lots of money....