The Real Diary of a Real Boy

by Henry A. (Henry Augustus) Shute 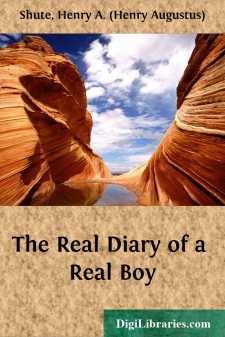 In the winter of 1901-02, while rummaging an old closet in the shed-chamber of my father's house, I unearthed a salt-box which had been equipped with leather hinges at the expense of considerable ingenuity, and at a very remote period. In addition to this, a hasp of the same material, firmly fastened by carpet-tacks and a catch of bent wire, bade defiance to burglars, midnight marauders, and safe-breakers.

With the aid of a tack-hammer the combination was readily solved, and aneager examination of the contents of the box disclosed:—1. Fish-line of braided shoemaker's thread, with perch hook, towhich adhered the mummied remains of a worm that lived andflourished many, many years ago.2. Popgun of pith elder and hoop-skirt wire.3. Horse-chestnut bolas, calculated to revolve in oppositedirections with great velocity, by an up-and-down motion of theholder's wrist; also extensively used for the adornment oftelegraph-wires,—there were no telephones in those days,—andthe cause of great profanity amongst linemen.4. More fish-hooks of the ring variety, now obsolete.5. One blood alley, two chinees, a parti-colored glass agate,three pewees, and unnumbered drab-colored marbles.6. Small bow of whalebone, with two arrows.7. Six-inch bean-blower, for school use—a weapon of considerablerange and great precision when used with judgment behind aGuyot's Common School Geography.8. Unexpended ammunition for same, consisting of putty pellets.9. Frog's hind leg, extra dry.10. Wing of bluejay, very ditto.11. Letter from "Beany," postmarked "Biddeford, Me." and expressinggreat indignation because "Pewt" "hasent wrote."12. Copy-book inscribed "Diry."The examination of this copy-book lasted the rest of the day, and it wasread with the peculiar pleasure one experiences in reviewing some of theevents of a happy boyhood.With the earnest hope that others may experience a little of thepleasure I gained from the reading, I submit the "Diry" to the public.HENRY A. SHUTE.EXETER, N. H. Sept. 23, 1902. DIRY

Father thot i aught to keep a diry, but i sed i dident want to, because i coodent wright well enuf, but he sed he wood give $1000 dolars if he had kept a diry when he was a boy.

Mother said she gessed nobody wood dass to read it, but father said everybody would tumble over each other to read it, anyhow he wood give $1000 dolars if he had kept it. i told him i wood keep one regular if he wood give me a quarter of a dolar a week, but he said i had got to keep it anyhow and i woodent get no quarter for it neither, but he woodent ask to read it for a year, and i know he will forget it before that, so i am going to wright just what i want to in it. Father always forgets everything but my lickins. he remembers them every time you bet.

So i have got to keep it, but it seems to me that my diry is worth a quarter of a dolar a week if fathers is worth $1000 dolars, everybody says father was a buster when he was a boy and went round with Gim Melcher and Charles Talor....