The Ranch at the Wolverine 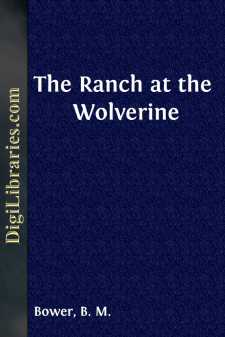 CHAPTER I LET US START AT THE BEGINNING

Four trail-worn oxen, their necks bowed to the yoke of patient servitude, should really begin this story. But to follow the trail they made would take several chapters which you certainly would skip—unless you like to hear the tale of how the wilderness was tamed and can thrill at the stern history of those who did the taming while they fought to keep their stomachs fairly well filled with food and their hard-muscled bodies fit for the fray.

There was a woman, low-browed, uncombed, harsh of voice and speech and nature, who drove the four oxen forward over lava rock and rough prairie and the scanty sage. I might tell you a great deal about Marthy, who plodded stolidly across the desert and the low-lying hills along the Blackfoot; and of her weak-souled, shiftless husband whom she called Jase, when she did not call him worse.

They were the pioneers whose lurching wagon first forded the singing Wolverine stream just where it greens the tiny valley and then slips between huge lava-rock ledges to join the larger stream. Jase would have stopped there and called home the sheltered little green spot in the gray barrenness. But Marthy went on, up the farther hill and across the upland, another full day's journey with the sweating oxen.

They camped that night on another little, singing stream, in another little valley, which was not so level or so green or so wholly pleasing to the eye. And that night two of the oxen, impelled by a surer instinct than their human owners, strayed away down a narrow, winding gorge and so discovered the Cove and feasted upon its rich grasses. It was Marthy who went after them and who recognized the little, hidden Eden as the place of her dreams—supposing she ever had dreams. So Marthy and Jase and the four oxen took possession, and with much labor and many hard years for the woman, and with the same number of years and as little labor as he could manage on the man's part, they tamed the Cove and made it a beauty spot in that wild land. A beauty spot, though their lives held nothing but treadmill toil and harsh words and a mental horizon narrowed almost to the limits of the grim, gray, rock wall that surrounded them.

Another sturdy-souled couple came afterwards and saw the Wolverine and made for themselves a home upon its banks. And in the rough little log cabin was born the girl-child I want you to meet; a girl-child when she should have been a boy to meet her father's need and great desire; a girl-child whose very name was a compromise between the parents. For they called her Billy for sake of the boy her father wanted, and Louise for the girl her mother had longed for to lighten that terrible loneliness which the far frontier brings to the women who brave its stern emptiness.

Do you like children? In other words, are you human? Then I want you to meet Billy Louise when she was ten and had lived all her life among the rocks and the sage and the stunted cedars and huge, gray hills of Idaho. Meet her with her pink sunbonnet hanging down the back of her neck and her big eyes taking in the squalidness of Marthy's crude kitchen in the Cove, and her terrible directness of speech hitting squarely the things she saw that were different from her own immaculate home....