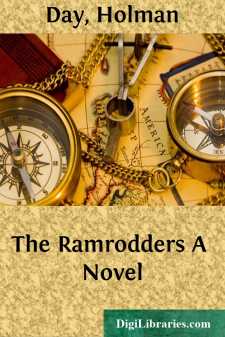 CHAPTER I THE BAITING OF THE ANCIENT LION

War and Peace had swapped corners that morning in the village of Fort Canibas. War was muttering at the end where two meeting-houses placidly faced each other across the street. Peace brooded over the ancient blockhouse, relic of the "Bloodless War," and upon the structure that Thelismer Thornton had converted from officers' barracks to his own uses as a dwelling.

At dawn a telegraph messenger jangled the bell in the dim hall of "The Barracks." It was an urgent cry from the chairman of the Republican State Committee. It announced his coming, and warned the autocrat of the North Country of the plot. The chairman knew. The plotters had been betrayed to him, and from his distance he enjoyed a perspective which is helpful in making political estimates. But Thelismer Thornton only chuckled over Luke Presson's fears. He went back to bed for another nap.

When he came down and ate breakfast alone in the big mess-room, which he had not allowed the carpenters to narrow by an inch, he was still amused by the chairman's panic. As a politician older than any of them, a man who had served his district fifty years in the legislature, he refused to believe—intrenched there in his fortress in the north—that there was danger abroad in the State.

"Reformers, eh?" He sneered the word aloud in the big room of echoes."Well, I can show them one up here. There's Ivus Niles!"

And at that moment Ivus Niles was marching into the village from the Jo Quacca hills, torch for the tinder that had been prepared. It is said that a cow kicked over a lantern that started the conflagration of its generation. In times when political tinder is dry there have been great men who have underestimated reform torches.

It was a bland June morning. The Hon. Thelismer Thornton was bland, too, in agreement with the weather. A good politician always agrees with what cannot be helped.

He stood in the door of "The Barracks" and gazed out upon the rolling St. John hills—a lofty, ponderous hulk of a man, thatched with white hair, his big, round face cherubic still in spite of its wrinkles. He lighted a cigar, and gazed up into the cloudless sky with the mental endorsement that it was good caucus weather. Then he trudged out across the grass-plot and climbed into his favorite seat. It was an arm-chair set high in the tangle of the roots of an overturned spruce-tree. The politicians of the county called that seat "The Throne," and for a quarter of a century the Hon. Thelismer Thornton had been nicknamed "The Duke of Fort Canibas." Add that the nicknames were not ill bestowed. Such was the Hon. Thelismer Thornton.

He had brought newspapers in his pockets. He set his eyeglasses on his bulging nose, and began to read.

In the highway below him teams went jogging into the village. There were fuzzy Canadian horses pulling buckboards sagging under the weight of all the men who could cling on. There were top carriages and even a hayrack well loaded with men.

Occasionally the old man lifted his gaze from his reading and eyed the dusty wayfarers benignantly....