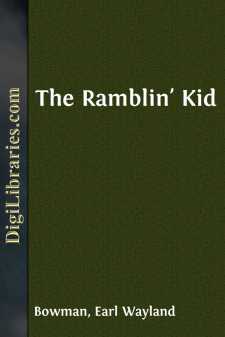 CHAPTER I A NIGHT LETTER

Sand and gravel slithered and slid under the heels of Old Pie Face as Skinny Rawlins whirled the broncho into the open space in front of the low-built, sprawling, adobe ranch house of the Quarter Circle KT and reined the pinto to a sudden stop. Skinny had been to Eagle Butte and with other things brought back the mail. It was hot, late June, the time between cutting the first crop of alfalfa and gathering, from the open range, the beef steers ready for the summer market. Regardless of the heat Skinny had ridden hard and his horse was a lather of sweat. A number of cowboys lounged, indolently, in the shade of the bunk-house, smoking cigarettes and contentedly enjoying the hour of rest after the noon-day dinner. Another, lean-built, slender, boyish in appearance and with strangely black, inscrutable eyes, stepped from around the corner of the house as Skinny jerked Old Pie Face to a standstill.

"Where's Old Heck?" Skinny asked excitedly. "I brought the mailвЂ”here, take it to him!"

The other, known on the Kiowa and the range of western Texas and Mexico only as "the Ramblin' Kid," strolled leisurely out through the sagging, weight-swung gate and up to the panting horse from which Skinny had not yet dismounted.

"Asleep, I reckon," he replied in a voice peculiarly low and deliberate, "вЂ”what's your spontaneousness about? You act like a special d'livery or somethin'."

"Old Heck's got a letter," Skinny said, jerkily; "maybe's it's bad news an' he ought to have it quick," as the Ramblin' Kid reached for a yellow envelope held in the outstretched hand.

At that instant Old Heck, owner and boss of the Quarter Circle KT cow outfit, stepped from the shadow of the open ranch-house door. He was short and stocky, red-faced, somewhere near the fifties, and a yellowish-gray mustache hung over tobacco blackened lips. Overalls, a checked blue and white shirt, open at the throat, boots into which the trousers legs were loosely jammed comprised his attire. He was bareheaded and the sun glistened on a wrinkly forehead, topped by a thin sprinkling of hair.

"What's the matter?" he asked drowsily, his small, gray-blue eyes blinking in the yellow sun-glare and still sluggish from the nap disturbed by the noise of Skinny's arrival.

"Nothin'. Skinny's just got a letter an' is excited about it," theRamblin' Kid said, handing the envelope to him. "It's for you."

The cowboys resting in the shade of the bunk-house rose to their feet, sauntered over and surrounded Old Heck and the Ramblin' Kid, commenting meanwhile, frankly and caustically, on the fagged condition of the broncho Skinny was on:

"Must 'a' been scared, the way you run that horse," Parker, range foreman of the Quarter Circle KT, a heavy-built, sandy-complexioned man in the forties, remarked witheringly to Skinny as the cow-puncher climbed from the saddle and slid to the ground.

"He's mine, I reckon," Skinny retorted, "an' I figure it's nobody's darn' business how I ride himвЂ”anyhow I brought Old Heck a telegram!" he added triumphantly....