The Rajah of Dah 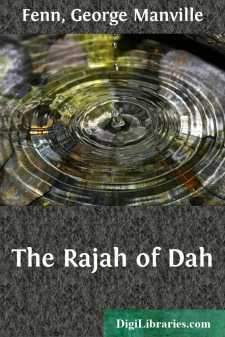 “Got all your tackle?”

“I’ll be bound to say you’ve forgotten something. Yes: fishing-tackle?”

“That we haven’t, Mr Wilson,” said a fresh voice, that of a bright-looking lad of sixteen, as he rose up in the long boat lying by the bamboo-made wharf at Dindong, the little trading port at the mouth of the Salan River, on the west coast of the Malay Peninsula.

“Trust you for the fish-hooks, squire,” said the first speaker. “But, I say, take a good look round, Murray. It’s an awful fix to be in to find yourself right up in the wilderness with the very thing you want most left behind.”

“It’s very good of you, Wilson,” said the gentleman addressed, a broad-shouldered man of forty, tanned and freckled by the eastern sun, and stooping low to avoid striking his head against the attap thatch rigged up over the stern of the boat, and giving it the aspect of a floating hut. “It’s very good of you, but I think we have everything; eh, Ned?”

“Yes, uncle; I can’t think of anything else.”

The lad laughed merrily, and took out a kind of pocket-book, which he opened to display the above necessaries, with scissors and penknife as well.

“Well done, Ned! I believe you have more brains than I have. I can’t think of anything else, Wilson. I only want your good wishes.”

“Matches?” said the gentleman on the wharf.

“Plenty, and we have each a burning-glass.”

“That’s right, and now once more: take my advice.”

Johnstone Murray, enthusiast over matters of natural history, shook his head, and rather a stern look came into his eyes as his nephew watched him eagerly.

“But, hang it, man! you can make excursions up and down the river from Dindong, and up the little branches as well. Surely you can get all you want from here, and not lose touch of civilisation.”

“But we want to lose touch of civilisation, my dear fellow.—What do you say, Ned? Shall we stop here?”

“Why, you foolish boy!” cried the gentleman addressed as Wilson, “you do not know what you are saying, or what risks you are going to run.”

“If he can,” said the other, gruffly. “I believe you two think you are going on quite a picnic, instead of what must be a dangerous expedition.”

“My dear Wilson,” said the principal occupant of the boat, merrily, “you shut yourself up so much in your bungalow, and lead such a serious plodding life over your merchandise and cargoes, that you see danger in a paddle across the river.”

“Ah, well, perhaps I do,” said the merchant, taking off his light pith sun-hat to wipe his shining brow. “You really mean to go right up the river, then?”