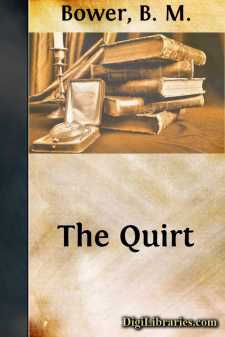 Quirt Creek flowed sluggishly between willows which sagged none too gracefully across its deeper pools, or languished beside the rocky stretches that were bone dry from July to October, with a narrow channel in the center where what water there was hurried along to the pools below. For a mile or more, where the land lay fairly level in a platter-like valley set in the lower hills, the mud that rimmed the pools was scored deep with the tracks of the "TJ up-and-down" cattle, as the double monogram of Hunter and Johnson was called.

A hard brand to work, a cattleman would tell you. Yet the TJ up-and-down herd never seemed to increase beyond a niggardly three hundred or so, though the Quirt ranch was older than its lordly neighbors, the Sawtooth Cattle Company, who numbered their cattle by tens of thousands and whose riders must have strings of fifteen horses apiece to keep them going; older too than many a modest ranch that had flourished awhile and had finished as line-camps of the Sawtooth when the Sawtooth bought ranch and brand for a lump sum that looked big to the rancher, who immediately departed to make himself a new home elsewhere: older than others which had somehow gone to pieces when the rancher died or went to the penitentiary under the stigma of a long sentence as a cattle thief. There were many such, for the Sawtooth, powerful and stern against outlawry, tolerated no pilfering from their thousands.

The less you have, the more careful you are of your possessions. Hunter and Johnson owned exactly a section and a half of land, and for a mile and a half Quirt Creek was fenced upon either side. They hired two men, cut what hay they could from a field which they irrigated, fed their cattle through the cold weather, watched them zealously through the summer, and managed to ship enough beef each fall to pay their grocery bill and their men's wages and have a balance sufficient to buy what clothes they needed, and perhaps pay a doctor if one of them fell ill. Which frequently happened, since Brit was becoming a prey to rheumatism that sometimes kept him in bed, and Frank occasionally indulged himself in a gallon or so of bad whisky and suffered afterwards from a badly deranged digestion.

Their house was a two-room log cabin, built when logs were easier to get than lumber. That the cabin contained two rooms was the result of circumstances rather than design. Brit had hauled from the mountain-side logs long and logs short, and it had seemed a shame to cut the long ones any shorter. Later, when the outside world had crept a little closer to their wilderness—as, go where you will, the outside world has a way of doing—he had built a lean-to shed against the cabin from what lumber there was left after building a cowshed against the log barn.

In the early days, Brit had had a wife and two children, but the wife could not endure the loneliness of the ranch nor the inconvenience of living in a two-room log cabin. She was continually worrying over rattlesnakes and diphtheria and pneumonia, and begging Brit to sell out and live in town....