The Queen's Scarlet The Adventures and Misadventures of Sir Richard Frayne 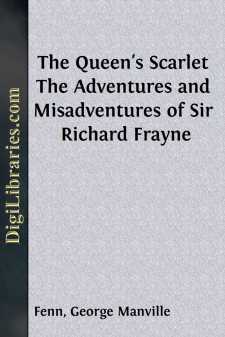 Two rooks flew over the Cathedral Close, and as they neared the old square Norman tower they cawed in a sneering way.

That was enough. Out like magic came the jackdaws from hole and corner—snapping, snarling, and barking birdily—to join in a hue and cry as they formed a pack to drive away the bucolic intruders who dared to invade the precincts sacred to daws from the beginning of architectural time; and this task over, they returned to sit on corbel, leaden spout, crevice, and ledge, to erect the feathers of their powdered heads and make remarks to one another, till the chimes rang out and the big bell boomed the hour.

“Bother Mark!” said Richard Frayne, Baronet. “If he had ten thousand a year, he’d spend twenty. I can’t do it, and I won’t.”

Richard Frayne puckered up his brow and began reading away at Lord Wolseley’s Red Book—after being interrupted by the jackdaws—trying to master the puzzling military details, but finding it impossible while his brain was full of his cousin’s money troubles; and at last, in despair, he pitched the little leather-covered book aside, walked to the side-table, took his handsome flute from its case, set up a piece of music on a stand, and began to run through a few preliminary flourishes that were peculiarly bird-like in their trilling, when there was a tap at the door and Jerry Brigley thrust in his head.

“Who does?” said Richard, hurriedly putting aside his flute.

Jerry held out a card.

“‘Isaac Simpson, clerical and military tailor,’” read the young man. “What does he want with me?” Then, quickly: “Oh! of course! I know. Show him in.”

A little, stoutish, smooth man, in shiny broadcloth and a profuse perspiration, entered directly after, carrying a brown leather handbag and his hat, which he took from his left finger and thumb and used to make a most deferential bow. There he stood, smiling and sleek, dabbing his face with a red silk handkerchief.

“You wanted to see me?” said Richard rather distantly.

“Well, yes, sir—begging your pardon, sir. By Mr Mark Frayne’s introduction, sir. Said business was business, and I might venture to call, sir. Been Mr Mark Frayne’s tailor, sir, three years come next quarter, sir; and I’ve ventured to bring my new patterns with me, sir.”

“My cousin should have spoken to me first, Mr Simpson,” said Richard, “and I could have saved you this trouble.”

“Trouble, sir? Oh! dear me, no, sir! It’s a pleasure to me to have the honour. You see, I almost knew you personally though before, sir: Mr Mark Frayne was always talking about you and your country place. Now, I have here, sir,” said the visitor, rattling open his patterns like a card-trick, “some fashions that only come down by post this morning, sir; and I said to myself, ‘Here’s your opportunity. You can’t expect a gentleman as has his garments from Servile Row to care about goods as every counter-jumper in Primchilsea has seen....