The Quaker Colonies, a chronicle of the proprietors of the Delaware 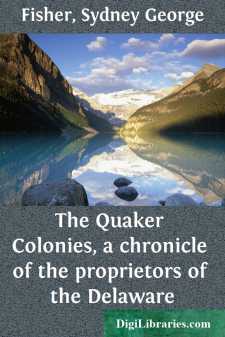 Chapter I. The Birth Of Pennsylvania

In 1661, the year after Charles II was restored to the throne of England, William Penn was a seventeen-year-old student at Christ Church, Oxford. His father, a distinguished admiral in high favor at Court, had abandoned his erstwhile friends and had aided in restoring King Charlie to his own again. Young William was associating with the sons of the aristocracy and was receiving an education which would fit him to obtain preferment at Court. But there was a serious vein in him, and while at a high church Oxford College he was surreptitiously attending the meetings and listening to the preaching of the despised and outlawed Quakers. There he first began to hear of the plans of a group of Quakers to found colonies on the Delaware in America. Forty years afterwards he wrote, "I had an opening of joy as to these parts in the year 1661 at Oxford." And with America and the Quakers, in spite of a brief youthful experience as a soldier and a courtier, William Penn's life, as well as his fame, is indissolubly linked.

Quakerism was one of the many religious sects born in the seventeenth century under the influence of Puritan thought. The foundation principle of the Reformation, the right of private judgment, the Quakers carried out to its logical conclusion; but they were people whose minds had so long been suppressed and terrorized that, once free, they rushed to extremes. They shocked and horrified even the most advanced Reformation sects by rejecting Baptism, the doctrine of the Trinity, and all sacraments, forms, and ceremonies. They represented, on their best side, the most vigorous effort of the Reformation to return to the spirituality and the simplicity of the early Christians. But their intense spirituality, pathetic often in its extreme manifestations, was not wholly concerned with another world. Their humane ideas and philanthropic methods, such as the abolition of slavery, and the reform of prisons and of charitable institutions, came in time to be accepted as fundamental practical social principles.

The tendencies of which Quakerism formed only one manifestation appeared outside of England, in Italy, in France, and especially in Germany. The fundamental Quaker idea of "quietism," as it was called, or peaceful, silent contemplation as a spiritual form of worship and as a development of moral consciousness, was very widespread at the close of the Reformation and even began to be practiced in the Roman Catholic Church until it was stopped by the Jesuits. The most extreme of the English Quakers, however, gave way to such extravagances of conduct as trembling when they preached (whence their name), preaching openly in the streets and fields—a horrible thing at that time—interrupting other congregations, and appearing naked as a sign and warning. They gave offense by refusing to remove their hats in public and by applying to all alike the words "thee" and "thou," a form of address hitherto used only to servants and inferiors. Worst of all, the Quakers refused to pay tithes or taxes to support the Church of England....