The Pursuit of the House-Boat Being Some Further Account of the Divers Doings of the Associated Shades, under the Leadership of Sherlock Holmes, Esq. 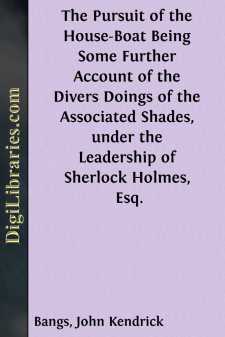 I The Associated Shades Take Action

The House-boat of the Associated Shades, formerly located upon the River Styx, as the reader may possibly remember, had been torn from its moorings and navigated out into unknown seas by that vengeful pirate Captain Kidd, aided and abetted by some of the most ruffianly inhabitants of Hades. Like a thief in the night had they come, and for no better reason than that the Captain had been unanimously voted a shade too shady to associate with self-respecting spirits had they made off with the happy floating club-house of their betters; and worst of all, with them, by force of circumstances over which they had no control, had sailed also the fair Queen Elizabeth, the spirited Xanthippe, and every other strong-minded and beautiful woman of Erebean society, whereby the men thereof were rendered desolate.

“I can’t stand it!” cried Raleigh, desperately, as with his accustomed grace he presided over a special meeting of the club, called on the bank of the inky Stygian stream, at the point where the missing boat had been moored. “Think of it, gentlemen, Elizabeth of England, Calpurnia of Rome, Ophelia of Denmark, and every precious jewel in our social diadem gone, vanished completely; and with whom? Kidd, of all men in the universe! Kidd, the pirate, the ruffian—”

“Don’t take on so, my dear Sir Walter,” said Socrates, cheerfully. “What’s the use of going into hysterics? You are not a woman, and should eschew that luxury. Xanthippe is with them, and I’ll warrant you that when that cherished spouse of mine has recovered from the effects of the sea, say the third day out, Kidd and his crew will be walking the plank, and voluntarily at that.”

“But the House-boat itself,” murmured Noah, sadly. “That was my delight. It reminded me in some respects of the Ark.”

“The law of compensation enters in there, my dear Commodore,” retorted Socrates. “For me, with Xanthippe abroad I do not need a club to go to; I can stay at home and take my hemlock in peace and straight. Xanthippe always compelled me to dilute it at the rate of one quart of water to the finger.”

“Well, we didn’t all marry Xanthippe,” put in Cæsar, firmly, “therefore we are not all satisfied with the situation. I, for one, quite agree with Sir Walter that something must be done, and quickly. Are we to sit here and do nothing, allowing that fiend to kidnap our wives with impunity?”

“Not at all,” interposed Bonaparte. “The time for action has arrived. All things considered he is welcome to Marie Louise, but the idea of Josephine going off on a cruise of that kind breaks my heart.”

“No question about it,” observed Dr. Johnson. “We’ve got to do something if it is only for the sake of appearances. The question really is, what shall be done first?”

“I am in favor of taking a drink as the first step, and considering the matter of further action afterwards,” suggested Shakespeare, and it was this suggestion that made the members unanimous upon the necessity for immediate action, for when the assembled spirits called for their various favorite beverages it was found that there were none to be had, it being Sunday, and all the establishments wherein liquid refreshments were licensed to be sold being closed—for at the time of writing the local government of Hades was in the hands of the reform party....