The Psychology of Nations A Contribution to the Philosophy of History 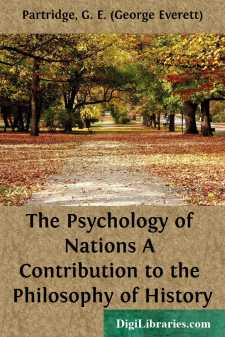 This book contains two closely related studies of the consciousness of nations. It has been written during the closing months of the war and in the days that have followed, and is completed while the Peace Conference is still in session, holding in the balance, as many believe, the fate of many hopes, and perhaps the whole future of the world. We see focussed there in Paris all the motives that have ever entered into human history and all the ideals that have influenced human affairs. The question must have arisen in all minds in, some form as to what the place of these motives and ideals and dramatic moments is in the progress of the world. Is the world governed after all by the laws of nature in all its progress? Do ideals and motives govern the world, but only as these ideals and motives are themselves produced according to biological or psychological principles? Or, again, does progress depend upon historical moments, upon conscious purposes which may divert the course of nature and in a real sense create the future? It is with the whole problem of history that we are confronted in these practical hours. At heart our problem is that of the place of man in nature as a conscious factor of progress. This is a problem, finally, of the philosophy of history, but it is rather in a more concrete way and upon a different level that it is to be considered here,—and somewhat incidentally to other more specific questions. But this is the problem that is always before us, and the one to which this study aims to make some contribution, however small.

The first part of the book is a study of the motives of war. It is an analysis of the motives of war in the light of the general principles of the development of society. We wish to see what the causes of past wars have been, but we wish also to know what these motives are as they may exist as forces in the present state of society. In such a study, practical questions can never be far away. We can no longer study war as an abstract psychological problem, since war has brought us to a horrifying and humiliating situation. We have discovered that our modern world, with all its boasted morality and civilization, is actuated, at least in its relations among nations, by very unsocial motives. We live in a world in which nations thus far have been for the most part dominated by a theory of States as absolutely sovereign and independent of one another. Now it becomes evident that a logical consequence of that theory of States is absolute war. A prospect of a future of absolute war in a world in which industrial advances have placed in the hands of men such terrible forces of destruction, an absolute warfare that can now be carried into the air and under the sea is what makes any investigation of the motives of war now a very practical problem.

If the urgency of our situation drives us to such studies and makes us hasten to apply even an immature sociology and psychology, it ought not to prejudice our minds and make us, for example, fall into the error of wanting peace at any price—an ideal which, as a practical national philosophy, might be even worse than a spirit of militarism....