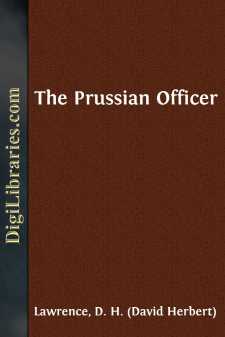 They had marched more than thirty kilometres since dawn, along the white, hot road where occasional thickets of trees threw a moment of shade, then out into the glare again. On either hand, the valley, wide and shallow, glittered with heat; dark green patches of rye, pale young corn, fallow and meadow and black pine woods spread in a dull, hot diagram under a glistening sky. But right in front the mountains ranged across, pale blue and very still, snow gleaming gently out of the deep atmosphere. And towards the mountains, on and on, the regiment marched between the rye fields and the meadows, between the scraggy fruit trees set regularly on either side the high road. The burnished, dark green rye threw on a suffocating heat, the mountains drew gradually nearer and more distinct. While the feet of the soldiers grew hotter, sweat ran through their hair under their helmets, and their knapsacks could burn no more in contact with their shoulders, but seemed instead to give off a cold, prickly sensation.

He walked on and on in silence, staring at the mountains ahead, that rose sheer out of the land, and stood fold behind fold, half earth, half heaven, the heaven, the banner with slits of soft snow, in the pale, bluish peaks.

He could now walk almost without pain. At the start, he had determined not to limp. It had made him sick to take the first steps, and during the first mile or so, he had compressed his breath, and the cold drops of sweat had stood on his forehead. But he had walked it off. What were they after all but bruises! He had looked at them, as he was getting up: deep bruises on the backs of his thighs. And since he had made his first step in the morning, he had been conscious of them, till now he had a tight, hot place in his chest, with suppressing the pain, and holding himself in. There seemed no air when he breathed. But he walked almost lightly.

The Captain's hand had trembled at taking his coffee at dawn: his orderly saw it again. And he saw the fine figure of the Captain wheeling on horseback at the farm-house ahead, a handsome figure in pale blue uniform with facings of scarlet, and the metal gleaming on the black helmet and the sword-scabbard, and dark streaks of sweat coming on the silky bay horse. The orderly felt he was connected with that figure moving so suddenly on horseback: he followed it like a shadow, mute and inevitable and damned by it. And the officer was always aware of the tramp of the company behind, the march of his orderly among the men.

The Captain was a tall man of about forty, grey at the temples. He had a handsome, finely knit figure, and was one of the best horsemen in the West. His orderly, having to rub him down, admired the amazing riding-muscles of his loins.

For the rest, the orderly scarcely noticed the officer any more than he noticed, himself. It was rarely he saw his master's face: he did not look at it. The Captain had reddish-brown, stilt hair, that he wore short upon his skull. His moustache was also cut short and bristly over a full, brutal mouth. His face was rather rugged, the cheeks thin. Perhaps the man was the more handsome for the deep lines in his face, the irritable tension of his brow, which gave him the look of a man who fights with life. His fair eyebrows stood bushy over light blue eyes that were always flashing with cold fire.

He was a Prussian aristocrat, haughty and overbearing. But his mother had been a Polish Countess. Having made too many gambling debts when he was young, he had ruined his prospects in the Army, and remained an infantry captain. He had never married: his position did not allow of it, and no woman had ever moved him to it. His time he spent riding—occasionally he rode one of his own horses at the races—and at the officers club. Now and then he took himself a mistress. But after such an event, he returned to duty with his brow still more tense, his eyes still more hostile and irritable. With the men, however, he was merely impersonal, though a devil when roused; so that, on the whole, they feared him, but had no great aversion from him....