The Proverbs of Scotland 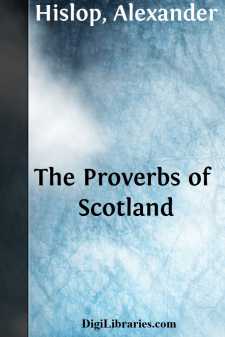 he gathering together of the Proverbs of Scotland has occupied the attention of several collectors. The earliest work on the subject which has been traced is that of Beaton, Archbishop of Glasgow, who, about the time of the Reformation, made a small collection. The definite information which we have of this work is so very slight, however, that it has been of little or no value to subsequent collectors and writers on the subject. The first collection of importance is the well-known one made by the Rev. David Fergusson, minister of Dunfermline, who was a contemporary of Archbishop Beaton. Fergusson's collection, which numbered 940 proverbs, was, all circumstances considered, a very commendable one; and it has served as a foundation to the labours of subsequent workers in the same field. The next is that of James Kelly, published in London in 1721. This volume contains nearly 3000 proverbs, and is very carefully arranged, with notes and parallel illustrations. The collection of Kelly is an able and valuable one, as he was perfectly conversant with the subject of proverbs generally; but we are compelled to agree with Motherwell, when he says that this writer's rendering of the Scottish dialect is "most barbarous;" nor do we wonder that it excited the profound contempt of Allan Ramsay, who, from his thorough knowledge of the Scottish vernacular, was openly indignant at the reputation gained by Kelly's work, and made a collection himself, which was published at Edinburgh in 1763. In a sensible but pedantic preface, which he addressed to the "Tenantry of Scotland, Farmers of the Dales, and Storemasters of the Hills," he states his reasons for issuing a work on the subject, and strongly recommends the use of proverbs, particularly among the agricultural portion of the community. After alluding to the work of Kelly as a "late large book of them, fou of errors, in a style neither Scots nor English," he goes on to say:—"As naething helps our happiness mair than to hae the mind made up with right principles, I desire you, for the thriving and pleasure of you and yours, to use your een and lend your lugs to these guid auld says, that shine with wail'd sense, and will as lang as the world wags. Gar your bairns get them by heart; let them hae a place among your family books; and may never a window-sole through the country be without them. On a spare hour, when the day is clear, behind a rick, or on the green howm, draw the treasure frae your pouch and enjoy the pleasant companion. Ye happy herds, while your hirdsels are feeding on the flowery braes, you may eithly mak yoursels maisters of the hale ware! How usefou it will prove to you (wha hae sae few opportunities of common clattering) when you forgather with your friends at kirk or market, banquet or bridal! By your proficiency, you'll be able, in a proverbial way, to keep up the soul of a conversation, that is baith blythe and usefou."

Nearly a hundred years elapsed before a new collection appeared, although, during that period, many editions of the works which we have mentioned were brought out to supply the demands of a proverb-loving public....