The Prose Works of William Wordsworth For the First Time Collected, With Additions from Unpublished Manuscripts. In Three Volumes.

by Alexander B. Grosart 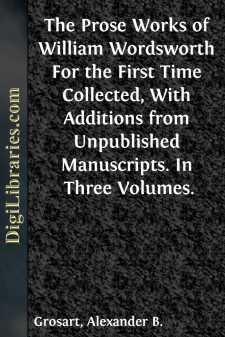 —name sufficient in its simpleness to give lustre to any page.

Having been requested thus to collect and edit his Prose Writings by those who hold his MSS. and are his nearest representatives, one little discovery or recovery among these MSS. suggested your Majesty as the one among all others to whom the illustrious Author would have chosen to dedicate these Works, viz. a rough transcript of a Poem which he had inscribed on the fly-leaf of a gift-copy of the collective edition of his Poems sent to the Royal Library at Windsor Castle. This very tender, beautiful, and pathetic Poem will be found on the other side of this Dedication. It must 'for all time' take its place beside the living Laureate's imperishable verse-tribute to your Majesty.

I venture to thank your Majesty for the double permission so appreciatively given—of this Dedication itself and to print (for the first time) the Poem. The gracious permission so pleasantly and discriminatingly signified is only one of abundant proofs that your Majesty is aware that of the enduring names of the reign of Victoria, Wordsworth's is supreme as Poet and Thinker.

Gratefully and loyally,ALEXANDER B. GROSART.

Deign, Sovereign Mistress! to accept a lay,No Laureate offering of elaborate art;But salutation taking its glad wayFrom deep recesses of a loyal heart. Queen, Wife, and Mother! may All-judging HeavenShower with a bounteous hand on Thee and ThineFelicity that only can be givenOn earth to goodness blest by grace divine. Lady! devoutly honoured and belovedThrough every realm confided to thy sway;Mayst Thou pursue thy course by God approved,And He will teach thy people to obey. As Thou art wont, thy sovereignty adornWith woman's gentleness, yet firm and staid;So shall that earthly crown thy brows have wornBe changed for one whose glory cannot fade. And now, by duty urged, I lay this BookBefore thy Majesty, in humble trustThat on its simplest pages Thou wilt lookWith a benign indulgence more than just. Nor wilt Thou blame an aged Poet's prayer,That issuing hence may steal into thy mindSome solace under weight of royal care,Or grief—the inheritance of humankind. For know we not that from celestial spheres,When Time was young, an inspiration came(Oh, were it mine!) to hallow saddest tears,And help life onward in its noblest aim?

In response to a request put in the most gratifying way possible of the nearest representatives of WORDSWORTH, the Editor has prepared this collection of his Prose Works. That this should be done for the first time herein seems somewhat remarkable, especially in the knowledge of the permanent value which the illustrious Author attached to his Prose, and that he repeatedly expressed his wish and expectation that it would be thus brought together and published, e.g. in the 'Memoirs,' speaking of his own prose writings, he said that but for COLERIDGE'S irregularity of purpose he should probably have left much more in that kind behind him. When COLERIDGE was proposing to publish his 'Friend,' he (WORDSWORTH) had offered contributions. COLERIDGE had expressed himself pleased with the offer, but said, "I must arrange my principles for the work, and when that is done I shall be glad of your aid." But this "arrangement of principles" never took place. WORDSWORTH added: "I think my nephew, Dr. Wordsworth, will, after my death, collect and publish all I have written in prose...." "On another occasion, I believe, he intimated a desire that his works in Prose should be edited by his son-in-law, Mr. Quillinan." Similarly he wrote to Professor REED in 1840: 'I am much pleased by what you say in your letter of the 18th May last, upon the Tract of the "Convention of Cintra," and I think myself with some interest upon its being reprinted hereafter along with my other writings [in prose]. But the respect which, in common with all the rest of the rational part of the world, I bear for the DUKE OF WELLINGTON will prevent my reprinting the pamphlet during his lifetime. It has not been in my power to read the volumes of his Despatches, which I hear so highly spoken of; but I am convinced that nothing they contain could alter my opinion of the injurious tendency of that or any other Convention, conducted upon such principles....