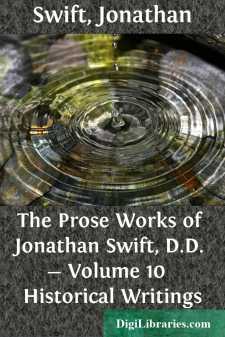 Of late years, that is to say, within the last thirty odd years, there has existed a certain amount of doubt as to whether or no the work known to us as "The History of the Four Last Years of the Queen," was really the product of Swift's pen. That a work of this nature had occupied Swift during his retirement at Windsor in 1713, is undoubted. That the work here reprinted from the edition given to the world in 1758, "by an anonymous editor from a copy surreptitiously taken by an anonymous friend" (to use Mr. Churton Collins's summary), is the actual work upon which Swift was engaged at Windsor, is not so certain. Let us for a moment trace the history of what is known of what Swift did write, and then we shall be in a better position to judge of the authenticity of what we have before us.

All that we know of this work is gathered from Swift's correspondence, as published by Sir Walter Scott in his edition of Swift's Works issued in 1824. The first reference there made is in a note from Dr. William King to Mrs. Whiteway, from which we gather that Swift, towards the end of the year 1736, was meditating the publication of what he had written in 1713. "As to the History," writes King, "the Dean may be assured I will take care to supply the dates that are wanting, and which can easily be done in an hour or two. The tracts, if he pleases, may be printed by way of appendix. This will be indeed less trouble than the interweaving them in the body of the history, and will do the author as much honour, and answer the purpose full as well."

This was written from Paris, under date November 9th, O.S., 1736. It can easily be gathered from this that the tracts referred to are the tracts on the same period which Swift wrote at the time in defence of the Oxford ministry. They are given in the fifth volume of this edition.

On December 7th, 1736, King was in London, and he immediately writes to Swift himself on the matter of the History. "I arrived here yesterday," he says, "and I am now ready to obey your commands. I hope you are come to a positive resolution concerning the History. You need not hesitate about the dates, or the references which are to be made to any public papers; for I can supply them without the least trouble. As well as I remember, there is but one of those public pieces which you determined should be inserted at length; I mean Sir Thomas Hanmer's Representation; this I have now by me. If you incline to publish the two tracts as an Appendix to the History, you will be pleased to see if the character given of the Earl of Oxford in the pamphlet of 1715 agrees with the character given of the same person in the History.[1] Perhaps on a review you may think proper to leave one of them quite out. You have (I think) barely mentioned the attempt of Guiscard, and the quarrel between Rechteren and Mesnager. But as these are facts which are probably now forgot or unknown, it would not be amiss if they were related at large in the notes; which may be done from the gazettes, or any other newspapers of those times....