The Prose Works of Jonathan Swift, D.D. - Volume 09 Contributions to The Tatler, The Examiner, The Spectator, and The Intelligencer 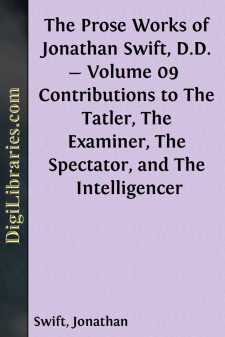 Swift has been styled the Prince of Journalists. Like most titles whose aim is to express in modern words the character and achievements of a man of a past age, this phrase is not of the happiest. Applied to so extraordinary a man as Jonathan Swift, it is both misleading and inadequate. At best it embodies but a half-truth. It belongs to that class of phrases which, in emphasizing a particular side of the character, sacrifices truth to a superficial cleverness, and so does injustice to the character as a whole. The vogue such phrases obtain is thus the measure of the misunderstanding that is current; so that it often becomes necessary to receive them with caution and to test them with care.

A prince in his art Swift certainly was, but his art was not the art of the journalist. Swift was a master of literary expression, and of all forms of that expression which aim at embodying in language the common life and common facts of men and their common nature. He had his limitations, of course; but just here lies the power of his special genius. He never attempted to express what he did not fully comprehend. If he saw things narrowly, he saw them definitely, and there was no mistaking the ideas he wished to convey. "He understands himself," said Dr. Johnson, "and his reader always understands him." Within his limitations Swift swayed a sovereign power. His narrowness of vision, however, did never blind him to the relations that exist between fact and fact, between object and subject, between the actual and the possible. At the same time it was not his province, as it was not his nature, to handle such relations in the abstract. The bent of his mind was towards the practical and not the pure reason. The moralist and the statesman went hand in hand in him—an excellent example of the eighteenth century thinker.

But to say this of Swift is not to say that he was a journalist. The journalist is the man of the hour writing for the hour in harmony with popular opinion. Both his text and his heads are ready-made for him. He follows the beaten road, and only essays new paths when conditions have become such as to force him along them. Such a man Swift certainly was not. Journalism was not his way to the goal. If anything, it was, as Epictetus might have said, but a tavern by the way-side in which he took occasion to find the means by which the better to attain his goal. If Swift's contributions to the literature of his day be journalism, then did journalism spring full-grown into being, and its history since his time must be considered as a history of its degeneration. But they were much more than journalism. That they took the form they did, in contributions to the periodicals of his day, is but an accident which does not in the least affect the contributions themselves. These, in reality, constitute a criticism of the social and political life of the first thirty years of the English eighteenth century. From the time of the writing of "A Tale of a Tub" to the days of the Drapier's Letters, Swift dissected his countrymen with the pitiless hand of the master-surgeon....