The Promise of American Life 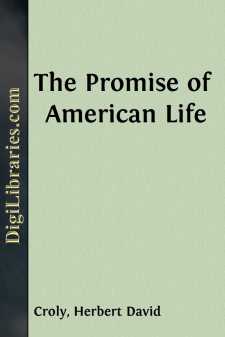 I WHAT IS THE PROMISE OF AMERICAN LIFE?

The average American is nothing if not patriotic. "The Americans are filled," says Mr. Emil Reich in his "Success among the Nations," "with such an implicit and absolute confidence in their Union and in their future success that any remark other than laudatory is inacceptable to the majority of them. We have had many opportunities of hearing public speakers in America cast doubts upon the very existence of God and of Providence, question the historic nature or veracity of the whole fabric of Christianity; but never has it been our fortune to catch the slightest whisper of doubt, the slightest want of faith, in the chief God of America—unlimited belief in the future of America." Mr. Reich's method of emphasis may not be very happy, but the substance of what he says is true. The faith of Americans in their own country is religious, if not in its intensity, at any rate in its almost absolute and universal authority. It pervades the air we breathe. As children we hear it asserted or implied in the conversation of our elders. Every new stage of our educational training provides some additional testimony on its behalf. Newspapers and novelists, orators and playwrights, even if they are little else, are at least loyal preachers of the Truth. The skeptic is not controverted; he is overlooked. It constitutes the kind of faith which is the implication, rather than the object, of thought, and consciously or unconsciously it enters largely into our personal lives as a formative influence. We may distrust and dislike much that is done in the name of our country by our fellow-countrymen; but our country itself, its democratic system, and its prosperous future are above suspicion.

Of course, Americans have no monopoly of patriotic enthusiasm and good faith. Englishmen return thanks to Providence for not being born anything but an Englishman, in churches and ale-houses as well as in comic operas. The Frenchman cherishes and proclaims the idea that France is the most civilized modern country and satisfies best the needs of a man of high social intelligence. The Russian, whose political and social estate does not seem enviable to his foreign contemporaries, secretes a vision of a mystically glorified Russia, which condemns to comparative insipidity the figures of the "Pax Britannica" and of "La Belle France" enlightening the world. Every nation, in proportion as its nationality is thoroughly alive, must be leavened by the ferment of some such faith. But there are significant differences between the faith of, say, an Englishman in the British Empire and that of an American in the Land of Democracy. The contents of an Englishman's national idea tends to be more exclusive. His patriotism is anchored to the historical achievements of Great Britain and restricted thereby. As a good patriot he is bound to be more preoccupied with the inherited fabric of national institutions and traditions than he is with the ideal and more than national possibilities of the future....