The Promise A Tale of the Great Northwest 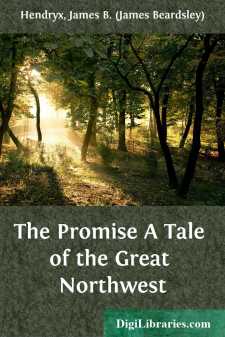 Young Carmody awoke to the realization of another day.

The sun of mid-forenoon cast a golden rhombus on the thick carpet, and through the open windows the autumnal air, stirred by just the suspicion of a breeze, was wafted deliciously cool against his burning cheeks and throbbing temples.

He gazed about the familiar confines of the room in puffy-eyed stupidity.

There was a burning thirst at his throat, and he moistened his dry lips with a bitter-coated tongue. His mouth was lined with a brown slime of dead liquor, which nauseated him and sent the dull ache to his head in great throbbing waves.

Upon a beautifully done mahogany table near the door stood a silver pitcher filled to the brim with clear, cold ice-water. It seemed miles away, and, despite the horrible thirst that gnawed at his throat, he lay for many minutes in dull contemplation of its burnished coolness.

The sodden condition of his imagination distorted his sense of proportion. The journey across the room loomed large in the scheme of things. It was a move of moment, to be undertaken not lightly, but after due and proper deliberation.

He threw off the covers and placed a tentative foot upon the floor.

A groan escaped him as his right hand brushed the counterpane. Gingerly he brought the member within range of his vision—it was swollen to the wrist and smeared with dried blood, which had oozed from an ugly split in the tight-drawn skin. Slowly he worked the fingers and frowned—more in perplexity than distress—at the sharp pain of the stiffened knuckles.

He crossed to the table and, springing the silver catch of a tiny door, cunningly empaneled in the wall, selected from the cellaret a long-necked, cut-glass decanter, from which he poured a liberal drink. The sight of it sickened him, and for an instant he stood contemplating the little beads that rushed upward and ranged themselves in a sparkling semicircle along the curve of the liquor-line.

"The hair of the dog is good for the bite," he muttered, and with an effort closed his eyes and conveyed the stuff jerkily to his lips. Part of the contents spilled over his fingers and splashed upon the polished table-top. As the diffused odor reached his nostrils a wave of nausea swept over him. With a shudder he drained the glass at a gulp and groped blindly for the water-pitcher, from which he greedily swallowed great quantities of ice-water.

He paused before a tall pier-glass and surveyed himself through bloodshot eyes. The telephone upon the opposite wall emitted a peremptory ring. Young Carmody turned with a frown of annoyance. He ignored the summons and carefully scrutinized his damaged hand.

His brain was rapidly clearing and, from out the tangled maze of dancing girls, popping corks, and hilarious, dress-suited men, loomed large the picture of a policeman. Just how it all happened he could not recollect. He must see the boys and get the straight of it.

His mirrored image grinned at the recollection of the officer, the quick, hard-struck blow, and the hysterical screams and laughter of the girls as they were seized in the strong arms of their companions, rushed across the sidewalk, and swung bodily into the waiting taxis....