The Professor at the Breakfast-Table 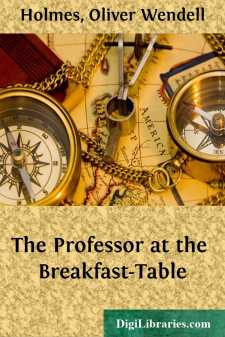 The reader of to-day will not forget, I trust, that it is nearly a quarter of a century since these papers were written. Statements which were true then are not necessarily true now. Thus, the speed of the trotting horse has been so much developed that the record of the year when the fastest time to that date was given must be very considerably altered, as may be seen by referring to a note on page 49 of the "Autocrat." No doubt many other statements and opinions might be more or less modified if I were writing today instead of having written before the war, when the world and I were both more than a score of years younger.

These papers followed close upon the track of the "Autocrat." They had to endure the trial to which all second comers are subjected, which is a formidable ordeal for the least as well as the greatest. Paradise Regained and the Second Part of Faust are examples which are enough to warn every one who has made a jingle fair hit with his arrow of the danger of missing when he looses "his fellow of the selfsame flight."

There is good reason why it should be so. The first juice that runs of itself from the grapes comes from the heart of the fruit, and tastes of the pulp only; when the grapes are squeezed in the press the flow betrays the flavor of the skin. If there is any freshness in the original idea of the work, if there is any individuality in the method or style of a new author, or of an old author on a new track, it will have lost much of its first effect when repeated. Still, there have not been wanting readers who have preferred this second series of papers to the first. The new papers were more aggressive than the earlier ones, and for that reason found a heartier welcome in some quarters, and met with a sharper antagonism in others. It amuses me to look back on some of the attacks they called forth. Opinions which do not excite the faintest show of temper at this time from those who do not accept them were treated as if they were the utterances of a nihilist incendiary. It required the exercise of some forbearance not to recriminate.

How a stray sentence, a popular saying, the maxim of some wise man, a line accidentally fallen upon and remembered, will sometimes help one when he is all ready to be vexed or indignant! One day, in the time when I was young or youngish, I happened to open a small copy of "Tom Jones," and glance at the title-page. There was one of those little engravings opposite, which bore the familiar name of "T. Uwins," as I remember it, and under it the words "Mr. Partridge bore all this patiently." How many times, when, after rough usage from ill-mannered critics, my own vocabulary of vituperation was simmering in such a lively way that it threatened to boil and lift its lid and so boil over, those words have calmed the small internal effervescence! There is very little in them and very little of them; and so there is not much in a linchpin considered by itself, but it often keeps a wheel from coming off and prevents what might be a catastrophe. The chief trouble in offering such papers as these to the readers of to-day is that their heresies have become so familiar among intelligent people that they have too commonplace an aspect. All the lighthouses and land-marks of belief bear so differently from the way in which they presented themselves when these papers were written that it is hard to recognize that we and our fellow-passengers are still in the same old vessel sailing the same unfathomable sea and bound to the same as yet unseen harbor.

But after all, there is not enough theology, good or bad, in these papers to cause them to be inscribed on the Protestant Index Expurgatorius; and if they are medicated with a few questionable dogmas or antidogmas, the public has become used to so much rougher treatments, that what was once an irritant may now act as an anodyne, and the reader may nod over pages which, when they were first written, would have waked him into a paroxysm of protest and denunciation....