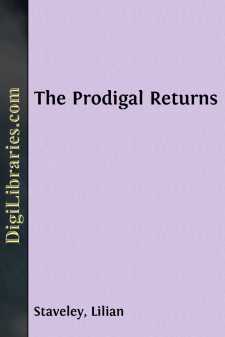 Sunshine and a garden path . . . flowers . . . the face and neck and bosom of the nurse upon whose heart I lay, and her voice telling me that she must leave me, that we must part, and immediately after anguish—blotting out the sunshine, the flowers, the face, the voice. This is my first recollection of Life—the pain of love. I was two years old.

Nothing more for two years—and then the picture of a pond and my baby brother floating on it, whilst with agonised hands I seized his small white coat and held him fast.

And then a meadow full of long, deep grass and summer flowers, and I—industriously picking buttercups into a tiny petticoat to take to cook, "to make the butter with," I said.

And then a table spread for tea. Our nurses, my two brothers, and myself. Angry words and screaming baby voices, a knife thrown by my little brother. Rage and hate.

And then a wedding, and I a bridesmaid, aged five years—the church, the altar, and great awe, and afterwards a long white table, white flowers, and a white Bride. Grown men on either side of me—smilingly delightful, tempting me with sweets and cakes and wine, and a new strange interest rising in me like a little flood of exultation—the joy of the world, and the first faint breath of the mystery of sex.

Then came winters of travel. Sunshine and mimosa, olive trees against an azure sky. Climbing winding, stony paths between green terraces, tulips and anemones and vines; white sunny walls and lizards; green frogs and deep wells fringed around with maidenhair. Mountains and a sea of lapis blue, and early in the mornings from this lapis lake a great red sun would rise upon a sky of molten gold. In the rooms so near me were my darling brothers, from whom I often had to part. Beauty and Joy, and Love and Pain—these made up life.

At ten I twice narrowly escaped death. From Paris we were to take the second or later half of the train to Marseilles. Late the night before my father suddenly said, "I have changed my mind; I feel we must go by the first train." This was with some difficulty arranged.

On reaching an immense bridge across a deep ravine I suddenly became acutely aware that the bridge was about to give way. In a terrible state of alarm I called out this fearful fact to my family. I burst into tears. I suffered agonies. My mother scolded me, and when we safely reached the other side of the bridge I was severely taken to task for my behaviour. The bridge broke with the next train over it—the train in which we should have been. Some four hundred people perished. It was the most terrible railway disaster that had ever occurred in France.

A few weeks later, death came nearer still. Having escaped from our tutor, with a party of other children we ran to two great reservoirs to fish for frogs. Laughing and talking and full of childish joy, we fished there for an hour, when all at once I was impelled, under an extraordinary sense of pressure, to call out, "If anyone falls into the water, no one must jump in to save them, but must immediately run to those long sticks" (I had never noticed them until I spoke) "and draw one out and hold it to whoever has fallen in." I spoke automatically, and felt as much surprised as my companions that I should speak of such a thing....