The Private Memoirs and Confessions of a Justified Sinner 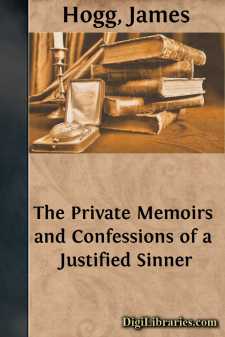 It appears from tradition, as well as some parish registers still extant, that the lands of Dalcastle (or Dalchastel, as it is often spelled) were possessed by a family of the name of Colwan, about one hundred and fifty years ago, and for at least a century previous to that period. That family was supposed to have been a branch of the ancient family of Colquhoun, and it is certain that from it spring the Cowans that spread towards the Border. I find that, in the year 1687, George Colwan succeeded his uncle of the same name, in the lands of Dalchastel and Balgrennan; and, this being all I can gather of the family from history, to tradition I must appeal for the remainder of the motley adventures of that house. But, of the matter furnished by the latter of these powerful monitors, I have no reason to complain: It has been handed down to the world in unlimited abundance; and I am certain that, in recording the hideous events which follow, I am only relating to the greater part of the inhabitants of at least four counties of Scotland matters of which they were before perfectly well informed.

This George was a rich man, or supposed to be so, and was married, when considerably advanced in life, to the sole heiress and reputed daughter of a Baillie Orde, of Glasgow. This proved a conjunction anything but agreeable to the parties contracting. It is well known that the Reformation principles had long before that time taken a powerful hold of the hearts and affections of the people of Scotland, although the feeling was by no means general, or in equal degrees; and it so happened that this married couple felt completely at variance on the subject. Granting it to have been so, one would have thought that the laird, owing to his retiring situation, would have been the one that inclined to the stern doctrines of the reformers; and that the young and gay dame from the city would have adhered to the free principles cherished by the court party, and indulged in rather to extremity, in opposition to their severe and carping contemporaries.

The contrary, however, happened to be the case. The laird was what his country neighbours called "a droll, careless chap", with a very limited proportion of the fear of God in his heart, and very nearly as little of the fear of man. The laird had not intentionally wronged or offended either of the parties, and perceived not the necessity of deprecating their vengeance. He had hitherto believed that he was living in most cordial terms with the greater part of the inhabitants of the earth, and with the powers above in particular: but woe be unto him if he was not soon convinced of the fallacy of such damning security! for his lady was the most severe and gloomy of all bigots to the principles of the Reformation. Hers were not the tenets of the great reformers, but theirs mightily overstrained and deformed. Theirs was an unguent hard to be swallowed; but hers was that unguent embittered and overheated until nature could not longer bear it....