The Prince of Parthia A Tragedy 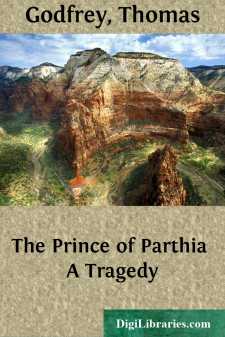 Thomas Godfrey, Jr., was born in Philadelphia, on December 4, 1736, the son of a man who himself won fame as an inventor of the Quadrant. Godfrey, Senior, was a friend of Benjamin Franklin, the two probably having been drawn together by their common interest in science. When Godfrey, Senior, died, December, 1749, it was Franklin who wrote his obituary notice.

Young Godfrey was a student at the College or Academy of Philadelphia, and when his education was completed, he became apprenticed to a watch-maker, remaining in that profession until 1758. As a student at the Academy, he came under the special influence of Dr. William Smith, the first Principal or Provost of that institution, and it was Dr. Smith who not only obtained for Godfrey a lieutenancy with the Pennsylvania troops in 1758, which sent him in the expedition against Fort Duquesne, but who, likewise, as the Editor of The American Magazine, was only too glad to accept and publish some of Godfrey's poetical effusions.

That the young man was popular, and that he associated with some of the most promising figures of the time, will be seen from the fact that, although he was only twenty-seven when he died, he was counted among the friends of Benjamin West and John Green, both portrait painters, of Francis Hopkinson, who was a student at the College of Philadelphia, and of Nathaniel Evans, a young minister whose loyalty found outlet after Godfrey's death in the Memorial Edition of Godfrey's works. Evans himself wrote poems and dialogues. In his confirmation of the fact that, as a poet, Godfrey was regarded favourably by the Philadelphians of the time, he quotes from the diary of one Miss Sarah Eve, who referred to him as "our poet."

Godfrey's reputation, as a young man with musical talents and a decided taste for painting, has come down to us. Certain it is that, during all of this time of varied occupation as a watch-maker and a soldier, he must have been courting the poetic Muse. There are some who speculate, without authority, on his having been a theatre-goer, and having become inspired as a playwright by the work of the American Company, in Philadelphia; especially by the good work of Douglass. Because of insufficient evidence, that is a question which remains unproven. Nevertheless, it is certain, from an extant letter written by Godfrey on November 17, 1759, and quoted by Seilhamer, that he must have had his attention turned to playwriting as a special art. He says to his correspondent, writing from North Carolina:

By the last vessel from this place, I sent you the copy of a tragedy I finished here, and desired your interest in bringing it on the stage; I have not yet heard of the vessel's safe arrival, and believe if she is safe it will be too late for the company now in Philadelphia. [Meaning, of course, Douglass's company.]

There are two facts to be noted in this communication: first, that it was written from North Carolina, where, in 1759, Godfrey had gone on some plantation business—probably as factor; and second, that it must have been penned with the idea of immediate production by the actors in Philadelphia. According to Seilhamer, Godfrey remained in North Carolina for three years. He did not write the entire manuscript of "The Prince of Parthia" while living in the South but, as he definitely states in his letter, finished it soon after his arrival....