The Press-Gang Afloat and Ashore 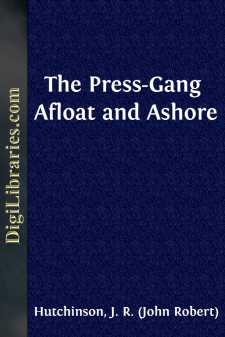 CHAPTER I. HOW THE PRESS-GANG CAME IN.

The practice of pressing men—that is to say, of taking by intimidation or force those who will not volunteer—would seem to have been world-wide in its adoption.

Wherever man desired to have a thing done, and was powerful enough to insure the doing of it, there he attained his end by the simple expedient of compelling others to do for him what he, unaided, could not do for himself.

The individual, provided he did not conspire in sufficient numbers to impede or defeat the end in view, counted only as a food-consuming atom in the human mass which was set to work out the purpose of the master mind and hand. His face value in the problem was that of a living wage. If he sought to enhance his value by opposing the master hand, the master hand seized him and wrung his withers.

So long as the compelling power confined the doing of the things it desired done to works of construction, it met with little opposition in its designs, experienced little difficulty in coercing the labour necessary for piling its walls, excavating its tanks, raising its pyramids and castles, or for levelling its roads and building its ships and cities. These were the commonplace achievements of peace, at which even the coerced might toil unafraid; for apart from the normal incidence of death, such works entailed little danger to the lives of the multitudes who wrought upon them. Men could in consequence be procured for them by the exercise of the minimum of coercion—by, that is to say, the mere threat of it.

When peace went to the wall and the pressed man was called upon to go to battle, the case assumed another aspect, an acuter phase. Given a state of war, the danger to life and limb, the incidence of death, at once jumped enormously, and in proportion as these disquieting factors in the pressed man's lot mounted up, just in that proportion did his opposition to the power that sought to take him become the more determined, strenuous, and undisguised.

Particularly was this true of warlike operations upon the sea, for to the extraordinary and terrible risks of war were here added the ordinary but ever-present dangers of wind and wave and storm, sufficient in themselves to appal the unaccustomed and to antagonise the unwilling. In face of these superlative risks the difficulty of procuring men was accentuated a thousand-fold, and with it both the nature and the degree of the coercive force necessary to be exercised for their procuration.

In these circumstances the Ruling Power had no option but to resort to more exigent means of attaining its end. In times of peace, working through myriad hands, it had constructed a thousand monuments of ornamental or utilitarian industry. These, with the commonweal they represented, were now threatened and must be protected at all costs. What more reasonable than to demand of those who had built, or of their successors in the perpetual inheritance of toil, that they should protect what they had reared. Hitherto, in most cases, the men required to meet the national need had submitted at a threat....