The Present State of Virginia 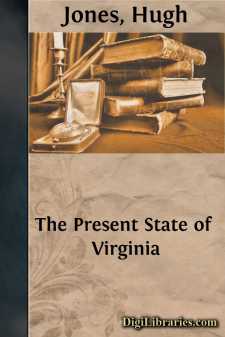 Dedications and Prefaces, which are prefix'd to most Books, being regarded by few Readers, I think it best for my present Purpose briefly to mention in an Introduction, what I would have known concerning the Occasion, Nature, and Use of this Treatise, before I enter upon the main Work it self.

When I considered the great Benefit that arises to the Publick, from the large Colony of Virginia, I observed, that tho' it be thus advantageous, yet it is capable of great Improvements still, and requires several Alterations, both with Regard to its own Welfare, and the Interest of Great Britain. Observing moreover, that few People in England (even many concerned in publick Affairs of this kind) have correct Notions of the true State of the Plantations; and having been eagerly applied to frequently, by Persons of the greatest Figure, Experience, and Judgment in political and national Concerns, for Information concerning all the Circumstances of Virginia, I was requested to digest methodically, and publish, what I knew and thought of these Matters; and being in a great Measure injoined to it by a noble Patron, I have here complied with his Commands, with the best of my Knowledge and Judgment.

For want of better Information, many that are most willing, capable, or obliged to promote Religion, Learning, Arts and Trade in Virginia, are either at a Loss how to set about it rightly, or else having engaged themselves therein, have in a great Measure miscarried in their Attempts, because true and particular Accounts of it are very difficult to be obtained; and this Country is altered wonderfully, and far more advanced and improved in all Respects of late Years, since the beginning of Colonel Spotswood's Lieutenancy, than in the whole Century before his Government, which he may be esteemed to have discharged with a commendable, just, and prudent Administration; a prosperous Administration, glorious for himself, and advantageous both for the Crown and the Plantation; whilst he was Lieutenant Governor of that Colony; whilst that Colony was honoured with such an excellent Governor; whilst that Governor was happy in such a flourishing, large, and fertile Colony.

And as this Country has made such a considerable Progress, under the Management of the late Governor Spotswood; so have we all imaginable Prospect that it will in the same regular course proceed towards its greatest Perfection, under the Care and Conduct of the present Governor Colonel Drysdale.

The Scales of Justice are now fix'd there upon their true Balance, and the Course of Trade is nearly confined to its right Channel.

Arts, Sciences, Trades, and useful Inventions are now planted there in some Measure, and with due Cultivation may thrive wonderfully.

Providence has furnish'd this Province with all Necessaries of Life, and Industry may supply it with all Conveniences and Advantages, for Profit, Ease, and Pleasure.

The best Measures have been concerted and proposed, and Schemes have been nicely drawn for the Encouragement of useful Discoveries and laudable Undertakings, both for the Security and Benefit of the Publick.