The Prehistoric World; or, Vanished races 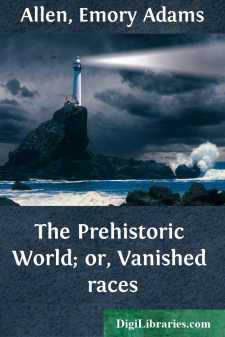 CAN read the book of the past? Who can tell us the story of Creation's morn? It is, not written in history, neither does it live in tradition. There is mystery here; but it is hid by the darkness of bygone ages. There is a true history here, but we have not learned well the alphabet used. Here are doubtless wondrous scenes; but our stand-point is removed by time so vast, the mist of years is so thick before us, that only the ruder outlines can be determined. The delicate tracery, the body of the picture, are hidden from our eye. The question as to the antiquity and primitive history of man, is full of interest in proportion as the solution is beset with difficulties. We question the past; but only here and there a response is heard. Surely bold is he who would attempt, from the few data at hand, to reconstruct the history of times and people so far removed. We quickly become convinced that many centuries, and tens of centuries, have rolled away since man's first appearance on the earth. We become impressed with the fact, "that multitudes of people have moved over the surface of the Earth, and sunk into the night of oblivion, without leaving a trace of their existence: without a memorial through which we might have at least learned their names."

To think of ourselves, is to imagine for our own nation an immortality. We are so great, so strong, surely nothing can move us. Let us learn humility from the past: and when, here and there, we come upon some reminder of a vanished people, trace the proofs of a teeming population in ancient times, and recover somewhat of a history, as true and touching as any that poets sing, let us recognize the fact, that nations as well as individuals pass away and are forgotten.

The past guards its secret well. To learn of it we must seek new methods of inquiry. Discouraged by the difficulties in the way, many have supposed it hidden from the present by a veil which only thickens as time passes. In the remains of prehistoric times they have failed to recognize the pages of history. They saw only monuments of ancient skill and perseverance: interesting sketches, not historical portraits. Some writers have held that we must give up the story of the past, "whether fact or chronology, doctrine or mythology—whether in Europe, Asia, Africa, or America—at Thebes, or Palenque—on Lycian shore, or Salisbury plain—lost is lost and gone is gone for evermore." Such is the lament of a gifted writer, amongst the first to ponder over the mysteries of the past. At the present day, with better means at hand, a more hopeful view is taken. But here a caution is necessary; for, in attempting to reconstruct the history of primitive times, such is the interest which it inspires, that many allow imagination to usurp the place of research, and write in terms too glowing for history.

The human mind is sleepless in the pursuit of knowledge. It is ever seeking new fields of conquest. It must advance: with it, standing still is the precursor of defeat. If necessary it invents new methods of attack, and rests not until it gains its objective point, or demonstrates the hopelessness of its quest. The world needs but be informed that on a given point knowledge is dim and uncertain, when there are found earnest minds applying to the solution of the mystery all the energies of their natures. All the resources of science are brought to bear; every department of knowledge is made to contribute of its store: and soon a mass of facts is established and a new science is added to the department of human knowledge.

Thus, with our knowledge of prehistoric times, what so seemingly vain as to attempt to roll back the flight of time, and learn the condition of primeval man? All the light of ancient history makes but little impression on the night of time. By its aid we can but dimly see the outlines of the fortieth century back; beyond is gloom soon lost in night. But a few short years ago, men did not think it possible to gain further information. With the materials at hand this could not be done. The triumph of the intellect was simply delayed, not hopelessly repulsed. Geology was but just beginning to make good its claim to a place among the sciences. This unfolded to man the physical history of the world as read from the rocks, and deals with times so vast and profound that we speak no longer of years, but of ages....