The Prairie Traveler A Hand-book for Overland Expeditions 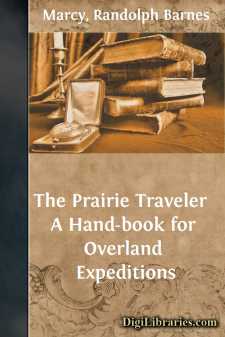 A quarter of a century's experience in frontier life, a great portion of which has been occupied in exploring the interior of our continent, and in long marches where I have been thrown exclusively upon my own resources, far beyond the bounds of the populated districts, and where the traveler must vary his expedients to surmount the numerous obstacles which the nature of the country continually reproduces, has shown me under what great disadvantages the "voyageur" labors for want of a timely initiation into those minor details of prairie-craft, which, however apparently unimportant in the abstract, are sure, upon the plains, to turn the balance of success for or against an enterprise.

This information is so varied, and is derived from so many different sources, that I still find every new expedition adds substantially to my practical knowledge, and am satisfied that a good Prairie Manual will be for the young traveler an addition to his equipment of inappreciable value.

With such a book in his hand, he will be able, in difficult circumstances, to avail himself of the matured experience of veteran travelers, and thereby avoid many otherwise unforeseen disasters; while, during the ordinary routine of marching, he will greatly augment the sum of his comforts, avoid many serious losses, and enjoy a comparative exemption from doubts and anxieties. He will feel himself a master spirit in the wilderness he traverses, and not the victim of every new combination of circumstances which nature affords or fate allots, as if to try his skill and prowess.

I have waited for several years, with the confident expectation that some one more competent than myself would assume the task, and give the public the desired information; but it seems that no one has taken sufficient interest in the subject to disseminate the benefits of his experience in this way. Our frontier-men, although brave in council and action, and possessing an intelligence that quickens in the face of danger, are apt to feel shy of the pen. They shun the atmosphere of the student's closet; their sphere is in the free and open wilderness. It is not to be wondered at, therefore, that to our veteran borderer the field of literature should remain a "terra incognita." It is our army that unites the chasm between the culture of civilization in the aspect of science, art, and social refinement, and the powerful simplicity of nature. On leaving the Military Academy, a majority of our officers are attached to the line of the army, and forthwith assigned to duty upon our remote and extended frontier, where the restless and warlike habits of the nomadic tribes render the soldier's life almost as unsettled as that of the savages themselves.

A regiment is stationed to-day on the borders of tropical Mexico; to-morrow, the war-whoop, borne on a gale from the northwest, compels its presence in the frozen latitudes of Puget's Sound. The very limited numerical strength of our army, scattered as it is over a vast area of territory, necessitates constant changes of stations, long and toilsome marches, a promptitude of action, and a tireless energy and self-reliance, that can only be acquired through an intimate acquaintance with the sphere in which we act and move....