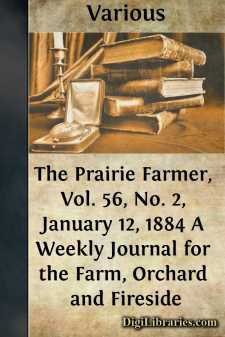 Bulletin No. 6 of Missouri Agricultural College Farm is devoted to an account of experiments intended to demonstrate the relation of dew to soil moisture. Prof. Sanborn has prosecuted his work with that patience and faithfulness characteristic of him, and the result is of a most interesting and useful nature.

The Professor begins by saying that many works on physics, directly or by implication, assert that the soil, by a well-known physical law, gains moisture from the air by night. One author says "Cultivated soils, on the contrary (being loose and porous), very freely radiate by night the heat which they absorb by day; in consequence of which they are much cooled down and plentifully condense the vapor of air into dew." Not all scientific works, however, make this incautious application of the fact that dew results from the condensation of moisture of the air in contact with cooler bodies. Farmers have quite universally accepted the view quoted, and believe that soils gain moisture by night from the air. This gain is considered of very great importance in periods of droughts, and is used in arguments favoring certain methods of tillage.

Professor Stockbridge, in 1879, at the Massachusetts Agricultural College, carried on very valuable and full experiments in test of this general belief, and arrived at results contradictory of this belief. He found, in a multitude of tests, that in every instance, save one, for the months from May to November, that the surface soil from one to five inches deep, was warmer than the air instead of cooler, as the law requires for condensation of moisture from the air. That exception was in the center of a dense forest, under peculiar atmospheric conditions. After noting these facts, ingenious methods were employed to test more directly the proposition that soil gains moisture from the air by night, with the result that he announced that soils lose moisture by night. Professor Stockbridge's efforts met with some criticism, and his conclusions did not receive the wide acceptance that his view of the question justifies. In reasoning from observation, Professor Stockbridge noted that the bottom of a heap of hay, during harvesting, would be wet in the morning, the under side of a board wet in the morning, and so of the other objects named. In the progress of tillage experiments related in his Bulletins Nos. 3 and 5, Prof. Sanborn's attention was again called to this question, resulting in the prosecution of direct tests of the soil moisture itself. When completed it is thought that there will then no longer be occasion to reason from assumed premises regarding the matter. The trials were begun late, and under disadvantages; and are to be understood as preliminary to more complete tests during 1884. The experiments were all conducted upon a soil bare of vegetation.

Prof. Sanborn concludes from his experiments thus far that the surface gains moisture from soil beneath it by capillary action, but gathers nothing from the air. This is made strongly probable, if not shown; first, because the soil is warmer by night than the air. (He relies upon other facts than his own for this assertion.) 2nd. Because he found more moisture in the soil when covered over night than when left bare. 3d. Because when hoed, thereby disturbing capillary action, he found less moisture than when unhoed, in surface soil....