The Practice and Theory of Bolshevism 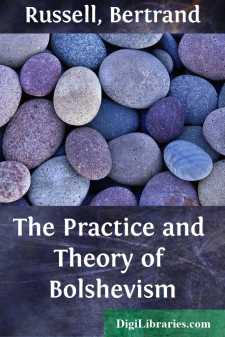 I WHAT IS HOPED FROM BOLSHEVISM

To understand Bolshevism it is not sufficient to know facts; it is necessary also to enter with sympathy or imagination into a new spirit. The chief thing that the Bolsheviks have done is to create a hope, or at any rate to make strong and widespread a hope which was formerly confined to a few. This aspect of the movement is as easy to grasp at a distance as it is in Russia—perhaps even easier, because in Russia present circumstances tend to obscure the view of the distant future. But the actual situation in Russia can only be understood superficially if we forget the hope which is the motive power of the whole. One might as well describe the Thebaid without mentioning that the hermits expected eternal bliss as the reward of their sacrifices here on earth.

I cannot share the hopes of the Bolsheviks any more than those of the Egyptian anchorites; I regard both as tragic delusions, destined to bring upon the world centuries of darkness and futile violence. The principles of the Sermon on the Mount are admirable, but their effect upon average human nature was very different from what was intended. Those who followed Christ did not learn to love their enemies or to turn the other cheek. They learned instead to use the Inquisition and the stake, to subject the human intellect to the yoke of an ignorant and intolerant priesthood, to degrade art and extinguish science for a thousand years. These were the inevitable results, not of the teaching, but of fanatical belief in the teaching. The hopes which inspire Communism are, in the main, as admirable as those instilled by the Sermon on the Mount, but they are held as fanatically, and are likely to do as much harm. Cruelty lurks in our instincts, and fanaticism is a camouflage for cruelty. Fanatics are seldom genuinely humane, and those who sincerely dread cruelty will be slow to adopt a fanatical creed. I do not know whether Bolshevism can be prevented from acquiring universal power. But even if it cannot, I am persuaded that those who stand out against it, not from love of ancient injustice, but in the name of the free spirit of Man, will be the bearers of the seeds of progress, from which, when the world's gestation is accomplished, new life will be born.

The war has left throughout Europe a mood of disillusionment and despair which calls aloud for a new religion, as the only force capable of giving men the energy to live vigorously. Bolshevism has supplied the new religion. It promises glorious things: an end of the injustice of rich and poor, an end of economic slavery, an end of war. It promises an end of the disunion of classes which poisons political life and threatens our industrial system with destruction. It promises an end to commercialism, that subtle falsehood that leads men to appraise everything by its money value, and to determine money value often merely by the caprices of idle plutocrats. It promises a world where all men and women shall be kept sane by work, and where all work shall be of value to the community, not only to a few wealthy vampires....