The Practice and Science of Drawing 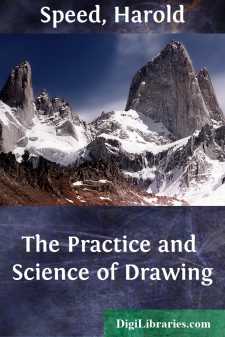 Add to My Favorites
Published: 8 years ago
Downloads: 136
Rating: (0 Votes)

The best things in an artist's work are so much a matter of intuition, that there is much to be said for the point of view that would altogether discourage intellectual inquiry into artistic phenomena on the part of the artist. Intuitions are shy things and apt to disappear if looked into too closely. And there is undoubtedly a danger that too much knowledge and training may supplant the natural intuitive feeling of a student, leaving only a cold knowledge of the means of expression in its place. For the artist, if he has the right stuff in him, has a consciousness, in doing his best work, of something, as Ruskin has said, "not in him but through him." He has been, as it were, but the agent through which it has found expression.

Talent can be described as "that which we have," and Genius as "that which has us." Now, although we may have little control over this power that "has us," and although it may be as well to abandon oneself unreservedly to its influence, there can be little doubt as to its being the business of the artist to see to it that his talent be so developed, that he may prove a fit instrument for the expression of whatever it may be given him to express; while it must be left to his individual temperament to decide how far it is advisable to pursue any intellectual analysis of the elusive things that are the true matter of art.

Provided the student realises this, and that art training can only deal with the perfecting of a means of expression and that the real matter of art lies above this and is beyond the scope of teaching, he cannot have too much of it. For although he must ever be a child before the influence that moves him, if it is not with the knowledge of the grown man that he takes off his coat and approaches the craft of painting or drawing, he will be poorly equipped to make them a means of conveying to others in adequate form the things he may wish to express. Great things are only done in art when the creative instinct of the artist has a well-organised executive faculty at its disposal.

Of the two divisions into which the technical study of painting can be divided, namely Form and Colour, we are concerned in this book with Form alone. But before proceeding to our immediate subject something should be said as to the nature of art generally, not with the ambition of arriving at any final result in a short chapter, but merely in order to give an idea of the point of view from which the following pages are written, so that misunderstandings may be avoided.

The variety of definitions that exist justifies some inquiry. The following are a few that come to mind:

"Art is nature expressed through a personality."

But what of architecture? Or music? Then there is Morris's

"Art is the expression of pleasure in work."

But this does not apply to music and poetry. Andrew Lang's

"Everything which we distinguish from nature"

seems too broad to catch hold of, while Tolstoy's

"An action by means of which one man, having experienced a feeling, intentionally transmits it to others"

is nearer the truth, and covers all the arts, but seems, from its omitting any mention of rhythm, very inadequate.