The Power of Movement in Plants 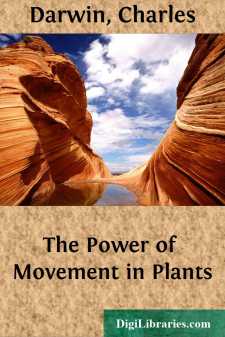 THE chief object of the present work is to describe and connect together several large classes of movement, common to almost all plants. The most widely prevalent movement is essentially of the same nature as that of the stem of a climbing plant, which bends successively to all points of the compass, so that the tip revolves. This movement has been called by Sachs "revolving nutation;" but we have found it much more convenient to use the terms circumnutation and circumnutate. As we shall have to say much about this movement, it will be useful here briefly to describe its nature. If we observe a circumnutating stem, which happens at the time to be bent, we will say towards the north, it will be found gradually to bend more and more easterly, until it faces the east; and so onwards to the south, then to the west, and back again to the north. If the movement had been quite regular, the apex would have described a circle, or rather, as the stem is always growing upwards, a circular spiral. But it generally describes irregular elliptical or oval figures; for the apex, after pointing in any one direction, commonly moves back to the opposite side, not, however, returning along the same line. Afterwards other irregular ellipses or ovals are successively described, with their longer [page 2] axes directed to different points of the compass. Whilst describing such figures, the apex often travels in a zigzag line, or makes small subordinate loops or triangles. In the case of leaves the ellipses are generally narrow.

Until recently the cause of all such bending movements was believed to be due to the increased growth of the side which becomes for a time convex; that this side does temporarily grow more quickly than the concave side has been well established; but De Vries has lately shown that such increased growth follows a previously increased state of turgescence on the convex side.* In the case of parts provided with a so-called joint, cushion or pulvinus, which consists of an aggregate of small cells that have ceased to increase in size from a very early age, we meet with similar movements; and here, as Pfeffer has shown** and as we shall see in the course of this work, the increased turgescence of the cells on opposite sides is not followed by increased growth. Wiesner denies in certain cases the accuracy of De Vries' conclusion about turgescence, and maintains*** that the increased extensibility of the cell-walls is the more important element. That such extensibility must accompany increased turgescence in order that the part may bend is manifest, and this has been insisted on by several botanists; but in the case of unicellular plants it can hardly fail to be the more important element. On the whole we may at present conclude that in-