The Power of Faith Exemplified In The Life And Writings Of The Late Mrs. Isabella Graham. 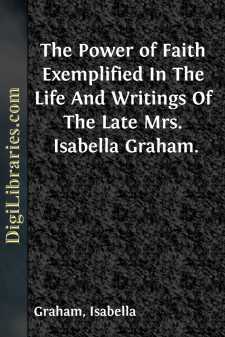 MANKIND take an interest in the history of those who, like themselves, have encountered the trials and discharged the duties of life. Too often, however, publicity is given to the lives of men splendid in acts of mighty mischief, in whom the secret exercises of the heart would not bear a scrutiny. The memoirs are comparatively few of those engaged in the humble and useful walks of active benevolence, where the breathings of the soul would display a character much to be admired, and more to be imitated.

As the celebrated Dr. Buchanan has observed, that if you were to ask certain persons in Christian countries, if they had any acquaintance with the religious world, they would say "they had never heard there was such a world;" so, while the external conduct of individuals is made the subject of much critical remark, the religion of the heart, the secret source of action, too frequently escapes unnoticed and unexplored.

It is only when the career of life is closed, that the character is completely established. On this account memoirs of the living are, in few instances, read with much interest; but when the soul has departed, and the body sleeps in dust, it may prove useful to survivors to examine the principles which led their departed friend to a life of honorable benevolence, and to a peaceful end.

Such considerations as these, and the urgent request of many respectable individuals, have induced the preparation of the following sketch of the life and writings of Mrs. ISABELLA GRAHAM, whose character was so esteemed, and whose memory is so venerated by all who knew her. The evident purity of motive which impelled her to activity in deeds of benevolence, at once commanded love and respect, which, in her case peculiarly, was unalloyed with any risings of jealousy, envy, or distrust.

Blessed with a spirit of philanthropy, with an ardent and generous mind, a sound judgment, and an excess of that sensibility which moulds the soul for friendship, a cultivated intellect and rich experience, her company was eagerly sought and highly valued by old and young. Though happily qualified to shine in the drawing-room, her time was seldom wasted there; for such a disposition of it would have been waste, contrasted with her usual employments. Her steps were not seen ascending the hill, of ambition, nor tracing the mazes of popular applause. Where the widow and the orphan wept, where the sick and the dying moaned, thither her footsteps hastened; and there, seen only by her heavenly Father, she administered to their temporal wants, breathed the voice of consolation on their ear, shed the tear of sympathy, exhibited the truths of the gospel from the sacred volume, and poured out her soul for them in prayer to her Saviour and her God.

In a few such deeds she rested not, nor was the story of them obtruded upon others, or recorded by herself. The recollection of past exertions was lost in her zeal to accomplish greater purposes and greater good: her heart expanded with her experience, and her means were too limited, the active powers of her vigorous mind too feeble, to fulfil the abounding desires of her soul in alleviating the miseries and increasing the comforts of the poor, the destitute, and afflicted....