The Power of Darkness 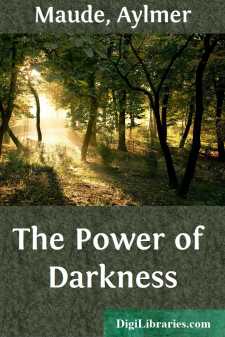 The Act takes place in autumn in a large village. The Scene represents Peter's roomy hut. Peter is sitting on a wooden bench, mending a horse-collar. AnÃ­sya and AkoulÃ­na are spinning, and singing a part-song.

PETER [looking out of the window] The horses have got loose again. If we don't look out they'll be killing the colt. NikÃ­ta! Hey, NikÃ­ta! Is the fellow deaf? [Listens. To the women] Shut up, one can't hear anything.

PETER. Drive the horses in.

NIKÍTA. We'll drive 'em in. All in good time.

PETER [shaking his head] Ah, these labourers! If I were well, I'd not keep one on no account. There's nothing but bother with 'em. [Rises and sits down again] NikÃ­ta!… It's no good shouting. One of you'd better go. Go, Akoúl, drive 'em in.

ANÍSYA. You're so mighty brisk yourself. When you're not sprawling on the top of the oven you're squatting on the bench. To goad others to work is all you're fit for.

PETER. If one weren't to goad you on a bit, one'd have no roof left over one's head before the year's out. Oh what people!

ANÍSYA. You go shoving a dozen jobs on to one's shoulders, and then do nothing but scold. It's easy to lie on the oven and give orders.

PETER [sighing] Oh, if 'twere not for this sickness that's got hold of me, I'd not keep him on another day.

AKOULÍNA [off the scene] Gee up, gee, woo. [A colt neighs, the stamping of horses' feet and the creaking of the gate are heard].

PETER. Bragging, that's what he's good at. I'd like to sack him, I would indeed.

ANÍSYA [mimicking him] “Like to sack him.” You buckle to yourself, and then talk.

AKOULÍNA [enters] It's all I could do to drive 'em in. That piebald always will …

AKOULÍNA. Where's NikÃ­ta? Why, standing out there in the street.

PETER. What's he standing there for?

AKOULÍNA. What's he standing there for? He stands there jabbering.

PETER. One can't get any sense out of her! Who's he jabbering with?

AKOULÍNA [does not hear] Eh, what?

Peter waves her off. She sits down to her spinning.

NAN [running in to her mother] NikÃ­ta's father and mother have come. They're going to take him away. It's true!

NAN. Yes. Blest if they're not! [Laughing] I was just going by, and NikÃ­ta, he says, “Good-bye, Anna Petróvna,” he says, “you must come and dance at my wedding. I'm leaving you,” he says, and laughs.

ANÍSYA [to her husband] There now. Much he cares. You see, he wants to leave of himself. “Sack him” indeed!

PETER. Well, let him go. Just as if I couldn't find somebody else.

ANÍSYA. And what about the money he's had in advance?

Nan stands listening at the door for awhile, and then exit.

PETER [frowning] The money? Well, he can work it off in summer, anyhow.

ANÍSYA. Well, of course you'll be glad if he goes and you've not got to feed him....