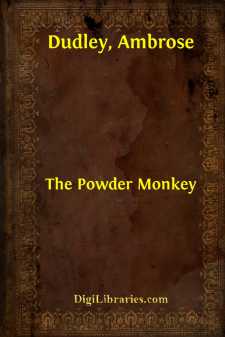 The little boy raised his head with a sudden start.

The little fellow started to his feet from where he had been sitting upon a sloping bank, and caught at the bars of the gate close by. He said nothing, but stared through the gloom of the autumn evening at the strange man, who now roared out:

The little fellow made an effort to speak, but only sighed at first, before stammering out:

“You don’t?” growled the man, fiercely, as he clapped the palm of his left hand upon the front of his waistband, and the back of his right hand level with it behind; then kicking out his right leg behind, he made a kind of hop on his left, as if to shake himself down into his clothes, as he hoisted them up.

“You don’t?” he said again, as he stared at the little fellow. “What are you, then? A furrener?”

“No, sir,” said the little boy, shrinking; for the man now took a step forward and clapped a big, brown, tarry hand upon his shoulder.

“Then why can’t yer understand yer own lingo?”

“Then why did you say you didn’t, and make me think you was a Frenchy?”

“Why, yer young savage!” cried the man. “Arn’t yer never been to school?”

“Cry-ying, sir,” came for answer, with a piteous sob.

“Cry-hying, you young swab?” roared the man, as if he were speaking through a storm. “Here, sop that up. Father been leathering yer?”

“No, Jack Jeens!” yelled the man. “Sir, indeed! Jack Jeens—that’s my name. England is my dwellin’ place—leastwise, when I arn’t off France and Spain, or in the ’Terranium leathering the French. Now, then, who has been givin’ it to you? Mother, p’r’aps, and turned you out of doors?”

“No, sir,” sobbed the boy, with a piteous look, in the gathering darkness.

“Yah!” came so savagely that the boy started to run; but the grip upon his shoulder tightened, and he was forced back against the bars of the gate. “Now, just you look here, messmet. You’re such a little un that I don’t like to hit yer for fear you should break; but don’t you haggravate me by talking as if I was a hofficer.”

“Hark at him!” growled the man, speaking to one of the stone gate-posts; and then, turning to the other, “Is he a hidgit?”

“No, that I’m not!” cried the boy, speaking indignantly now. “I wanted to say that I had no father and no mother.”