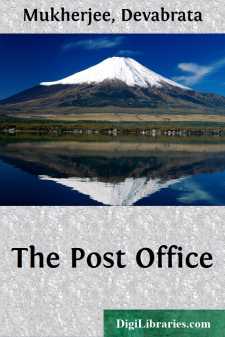 MADHAV. What a state I am in! Before he came, nothing mattered; I felt so free. But now that he has come, goodness knows from where, my heart is filled with his dear self, and my home will be no home to me when he leaves. Doctor, do you think he—

PHYSICIAN. If there's life in his fate, then he will live long.But what the medical scriptures say, it seems—

PHYSICIAN. The scriptures have it: "Bile or palsey, cold or gout spring all alike."

MADHAV. Oh, get along, don't fling your scriptures at me; you only make me more anxious; tell me what I can do.

PHYSICIAN. [Taking snuff] The patient needs the most scrupulous care.

MADHAV. That's true; but tell me how.

PHYSICIAN. I have already mentioned, on no account must he be let out of doors.

MADHAV Poor child, it is very hard to keep him indoors all day long.

PHYSICIAN. What else can you do? The autumn sun and the damp are both very bad for the little fellow—for the scriptures have it: /* "In wheezing, swoon or in nervous fret, In jaundice or leaden eyes—" */

MADHAV. Never mind the scriptures, please. Eh, then we must shut the poor thing up. Is there no other method?

PHYSICIAN. None at all: for, "In the wind and in the sun—"

MADHAV. What will your "in this and in that" do for me now? Why don't you let them alone and come straight to the point? What's to be done then? Your system is very, very hard for the poor boy; and he is so quiet too with all his pain and sickness. It tears my heart to see him wince, as he takes your medicine.

PHYSICIAN. effect. That's why the sage Chyabana observes: "In medicine as in good advices, the least palatable ones are the truest." Ah, well! I must be trotting now. [Exit]

MADHAV. No, but you are a devil to send children off their heads.

GAFFER. But you aren't a child, and you've no child in the house; why worry then?

MADHAV. Oh, but I have brought a child into the house.

GAFFER. Indeed, how so?

MADHAV. You remember how my wife was dying to adopt a child?

GAFFER. Yes, but that's an old story; you didn't like the idea.

MADHAV. You know, brother, how hard all this getting money in has been. That somebody else's child would sail in and waste all this money earned with so much trouble—Oh, I hated the idea. But this boy clings to my heart in such a queer sort of way—

GAFFER. So that's the trouble! and your money goes all for him and feels jolly lucky it does go at all.

MADHAV. Formerly, earning was a sort of passion with me; I simply couldn't help working for money. Now, I make money and as I know it is all for this dear boy, earning becomes a joy to me.

GAFFER. Ah, well, and where did you pick him up?

MADHAV. He is the son of a man who was a brother to my wife by village ties. He has had no mother since infancy; and now the other day he lost his father as well.

GAFFER. Poor thing: and so he needs me all the more.

MADHAV. The doctor says all the organs of his little body are at loggerheads with each other, and there isn't much hope for his life....