The Positive School of Criminology Three Lectures Given at the University of Naples, Italy on April 22, 23 and 24, 1901 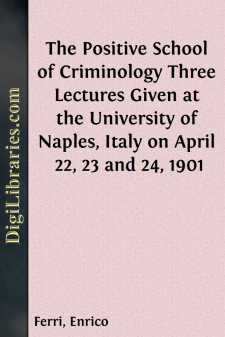 When, in the turmoil of my daily occupation, I received an invitation, several months ago, from several hundred students of this famous university, to give them a brief summary, in short special lectures, of the principal and fundamental conclusions of criminal sociology, I gladly accepted, because this invitation fell in with two ideals of mine. These two ideals are stirring my heart and are the secret of my life. In the first place, this invitation chimed with the ideal of my personal life, namely, to diffuse and propagate among my brothers the scientific ideas, which my brain has accumulated, not through any merit of mine, but thanks to the lucky prize inherited from my mother in the lottery of life. And the second ideal which this invitation called up before my mind's vision was this: The ideal of young people of Italy, united in morals and intellectual pursuits, feeling in their social lives the glow of a great aim. It would matter little whether this aim would agree with my own ideas or be opposed to them, so long as it should be an ideal which would lift the aspirations of the young people out of the fatal grasp of egoistic interests. Of course, we positivists know very well, that the material requirements of life shape and determine also the moral and intellectual aims of human consciousness. But positive science declares the following to be the indispensable requirement for the regeneration of human ideals: Without an ideal, neither an individual nor a collectivity can live, without it humanity is dead or dying. For it is the fire of an ideal which renders the life of each one of us possible, useful and fertile. And only by its help can each one of us, in the more or less short course of his or her existence, leave behind traces for the benefit of fellow-beings. The invitation extended to me proves that the students of Naples believe in the inspiring existence of such an ideal of science, and are anxious to learn more about ideas, with which the entire world of the present day is occupied, and whose life-giving breath enters even through the windows of the dry courtrooms, when their doors are closed against it.

Let us now speak of this new science, which has become known in Italy by the name of the Positive School of Criminology. This science, the same as every other phenomenon of scientific evolution, cannot be shortsightedly or conceitedly attributed to the arbitrary initiative of this or that thinker, this or that scientist. We must rather regard it as a natural product, a necessary phenomenon, in the development of that sad and somber department of science which deals with the disease of crime. It is this plague of crime which forms such a gloomy and painful contrast with the splendor of present-day civilization. The 19th century has won a great victory over mortality and infectious diseases by means of the masterful progress of physiology and natural science. But while contagious diseases have gradually diminished, we see on the other hand that moral diseases are growing more numerous in our so-called civilization....