The Poor Scholar Traits And Stories Of The Irish Peasantry, The Works of William Carleton, Volume Three 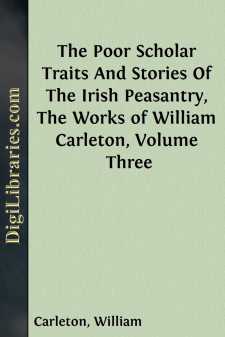 One day about the middle of November, in the year 18—, Dominick M'Evoy and his son Jemmy were digging potatoes on the side of a hard, barren hill, called Esker Dhu. The day was bitter and wintry, the men were thinly clad, and as the keen blast swept across the hill with considerable violence, the sleet-like rain which it bore along pelted into their garments with pitiless severity. The father had advanced into more than middle age; and having held, at a rack-rent the miserable waste of farm which he occupied, he was compelled to exert himself in its cultivation, despite either obduracy of soil, or inclemency of weather. This day, however, was so unusually severe, that the old man began to feel incapable of continuing his toil. The son bore it better; but whenever a cold rush of stormy rain came over them, both were compelled to stand with their sides against it, and their heads turned, so as that the ear almost rested back upon the shoulder in order to throw the rain off their faces. Of each, however, that cheek which was exposed to the rain and storm was beaten into a red hue; whilst the other part of their faces was both pale and hunger-pinched.

The father paused to take breath, and, supported by his spade, looked down upon the sheltered inland which, inhabited chiefly by Prostestants and Presbyterians, lay rich and warm-looking under him.

"Why, thin," he exclaimed to the son—a lad about fifteen,—"sure I know well I oughtn't to curse yez, anyway, you black set! an yit, the Lord forgive me my sins, I'm almost timpted to give yez a volley, an' that from my heart out! Look at thim, Jimmy agra—only look at the black thieves! how warm an' wealthy they sit there in our ould possessions, an' here we must toil till our fingers are worn to the stumps, upon this thievin' bent. The curse of Cromwell on it!—You might as well ax the divil for a blessin', as expect anything like a dacent crop out of it.—Look at thim two ridges!—such a poor sthring o' praties is in it!—one here an' one there—an' yit we must turn up the whole ridge for that same! Well, God sind the time soon, when the right will take place, Jimmy agra!"

"An' doesn't Pasthorini say it? Sure whin Twenty-five comes, we'll have our own agin: the right will overcome the might—the bottomless pit will be locked—ay, double: boulted, if St. Pettier gets the kays, for he's the very boy that will accommodate the heretics wid a warm corner; an' yit, faith, there's: many o' thim that myself 'ud put in a good word for, affcher all."

"Throth, an' here's the same, Jimmy. There's Jack Stuart, an' if there's a cool corner in hell, the same Jack will get it—an' that he may, I pray Gor this day, an' amin. The Lord sind it to him! for he richly desarves it. Kind, neighborly, and frindly, is he an' all belongin' to him; an' I wouldn't be where a hard word 'ud be spoken of him, nor a dog in connection wid the family ill-treated; for which reason may he get a cool corner in hell, I humbly sufflicate."

"What do you think of Jack Taylor?...