The Pony Rider Boys in the Ozarks Or, the Secret of Ruby Mountain 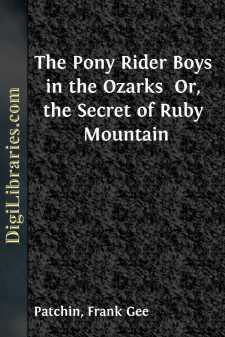 CHAPTER I A MYSTERIOUS VISITOR

There was no response to the imperative summons.

Professor Zepplin sat up in his cot, listening intently. Something had awakened him suddenly, but just what he was unable to decide.

"Be quiet over there, young men," he admonished, adding in a lower tone, "I'm sure I heard some one moving about."

The camp of the Pony Rider Boys lay wrapped in darkness, the camp-fire having long since died out. Not a sound disturbed the stillness of the night save the soft murmurings of the foliage, stirred in a gentle breeze that was drifting in from the southwest.

The Professor climbed from his cot, and, without waiting to draw on his clothes, stepped outside. He stood listening in front of his tent for several minutes, but heard nothing of a disturbing nature.

"I believe those young rascals are up to some of their pranks—either that, or I have been having bad dreams. While I'm up I might as well make sure," he decided, tip-toeing to the tent occupied by Tad Butler and Walter Perkins.

Both were apparently sleeping soundly, while in an adjoining tent Ned Rector and Stacy Brown were breathing regularly, sleeping the sleep that naturally comes after a day in the saddle over the rugged, uneven slopes of the Ozark Mountains.

Professor Zepplin uttered something that sounded not unlike anIndian's grunt of disgust.

"Dreams!" he decided sharply. "I should not have eaten that pie last night. Pie doesn't seem to trouble those boys in the least, but it certainly has a bad effect on my digestive apparatus."

Having thus delivered himself of his opinion on the value of pie as a bedtime food, the scientist trotted back to his tent, his teeth chattering and shoulders shrugging, for the mountain air was chill and the Professor was clad only in his pajamas.

No sooner had he settled himself between his comforting blankets, however, than he suddenly started up again with a muttered exclamation.

This time there could be no doubt. He plainly heard a dry twig snap near by; whether it were under the weight of man or beast, he did not know.

"There is something out there. It couldn't have been the pie after all. I'm going to find out what it is before I get back into this bed again," he decided firmly, slipping quietly from under the covers and peering out through the half closed flap of his tent.

As before, all was silence, the drowsy, indistinct voices of the night passing almost without notice.

But Professor Zepplin instead of waiting where he was, reached for his revolver and then strode boldly out into the open space in front of the tents, determined to solve the mystery, and, if possible, without waking the boys.

The reader no doubt already has recognized in the four boys sleeping in the little weather-beaten tents the same lads who some time before had started off for a vacation in the mountains where they hunted the cougar and the bobcat, the thrilling adventures met with on that journey having been related in a former volume entitled, "THE PONY RIDER BOYS IN THE ROCKIES."

They will be remembered, too, as the lads who, in "THE PONY RIDER BOYS IN TEXAS," crossed the plains on a cattle drive, during the course of which Tad Butler bravely saved the life of the Chinese cook, by plunging into a swollen torrent; and later, saved a large part of the great herd, himself being nearly trampled to death in a wild stampede of the cattle....