The Pony Rider Boys in the Grand Canyon Or, The Mystery of Bright Angel Gulch 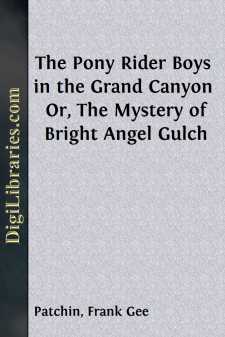 Tad Butler, who was industriously chopping wood at the rear of the woodshed of his home, finished the tough, knotted stick before looking up.

The almost unearthly chorus of yells behind him had not even startled the boy or caused him to cease his efforts until he had completed what he had set out to do. This finished, Tad turned a smiling face to the three brown-faced young men who were regarding him solemnly.

"Haven't you fellows anything to do?" demanded Tad.

"Yes, but we have graduated from the woodpile," replied Ned Rector.

"I got my diploma the first time I ever tried it," added Chunky Brown, otherwise and more properly known as Stacy Brown. "Cut a slice of my big toe off. They gave me my diploma right away. You fellows are too slow."

"Come in the house, won't you? Mother'll be glad to see you," urged Tad.

"Surely we will," agreed Walter Perkins. "That's what we came over to do."

"Didn't think we came over to help you chop wood, did you?" demandedChunky indignantly.

The boys filed in through the wood house, reaching the sitting room by way of the kitchen. Tad's mother gave them a smiling welcome, rising to extend a warm, friendly hand to each.

"We haven't lost the use of our legs yet, Mrs. Butler," declared the fat Chunky, growing very red in the face as he noted the disapproving glances directed at him by his companions.

"I hope you won't mind Chunky, Mrs. Butler," said Ned apologetically."You know he has lived among savages lately, and——-"

"Yes, ma'am, Ned and I have been constant companions for—-how long has it been, boys?"

"Shut up!" hissed Ned Rector in the fat boy's ear. "I'll whale you when we get outside, if you make any more such breaks."

"Yes, ma'am, about a hundred years old, more or less. Oh, I beg your pardon. I didn't mean it just that way," stammered Chunky, coloring again and fumbling his cap awkwardly.

"Now you have said it," groaned Walter.

"Go way back in the corner out of sight and sit down before I start something," commanded Ned. "You must excuse us, Mrs. Butler. It is as Chunky has said. We are all savages—-some of us more so than others, some less."

"It is unnecessary to make apologies. You are just a lot of healthy young men, full of life and spirits." Mrs. Butler patted Tad affectionately on the head. "Tad knows what I think of you all and how appreciative we both are over what Mr. Perkins has done for us. Now that I have had a little money left me, I am glad that Tad is able to spend more time with you in the open. I presume you will soon be thinking of another trip."

"A dog's tail wagging down the street without the dog," interjected the solemn voice of Chunky Brown from his new headquarters....