The Pony Rider Boys in Texas Or, The Veiled Riddle of the Plains 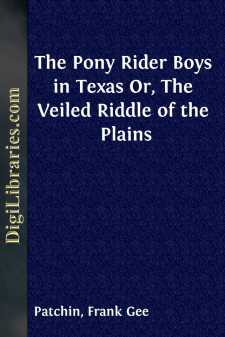 IN THE LAND OF THE COWBOY

"Sounds to me as if the town were being attacked. Just like war time, isn't it?"

"Never having been to war, I can't say. But it's a noise all right."

The freckle-faced boy, sitting on his pony with easy confidence, answered his companion's questions absently. After a careless glance up the street, he turned to resume his study of the noisy crowds that were surging back and forth along the main street of San Diego, Texas.

"Hear it, Tad? I should say I do hear it. Yet I must confess that it is a different sort of racket from any I've ever heard up North on the Fourth. Is this the way they celebrate it down here?"

"Why, a fellow might imagine that a band of wild Indians were tearing down on him. Here they come! Look out! Me for a side street!"

The little Texas town was dressed in its finest, in honor of the great national holiday, and the inhabitants for many miles around had ridden in at the first streak of dawn, that they might miss none of the frolic.

A rapid explosion of firearms accompanied by a chorus of wild yells and thrilling whoops, had caused Ned Rector to utter the exclamation of alarm. As he did so, he whirled his pony about, urging the little animal into a side street so that he might be out of the way of the body of men whom he saw rushing down upon them on galloping ponies.

"Hurry, Tad!" he called from the protection of the side street.

That others in the street had heard, and seen as well, was evident from the frantic haste with which they scrambled for the sidewalk, crowding those already there over yard fences, into stores and stairways in an effort to get clear of the roadway. A sudden panic had seized them, for well did they know the meaning of the shooting and the shouting.

A band of wild, uncontrollable cowboys, free for the time from the exacting work of the range, were sweeping down on the town, determined to do their part in the observance of the day.

Yet, Tad Butler, the freckle-faced boy, remained where he was undisturbed by the uproar, finding great interest in the excited throngs that were hurrying to cover. Nor did he appear to be alarmed when, a moment later, he found himself almost the sole occupant of the street at that point, with his pony backed up against the curbing, tossing its head and champing its bit restlessly.

As for the freckle-faced boy and his companion, the reader no doubt has recognized in them our old friends, Tad Butler and Ned Rector, the Pony Rider Boys. After their exciting experiences in the Rockies, and their discovery of the Lost Claim, which gave each of the boys a little fortune of his own, as narrated in the preceding volume, "The Pony Rider Boys in the Rockies," the Pony Riders had turned toward Texas as the scene of their next journeying. With Walter Perkins and Stacy Brown, the boys, under the guidance of Professor Zepplin, were to join a cattle outfit at San Diego, whence they were to travel northward with it....